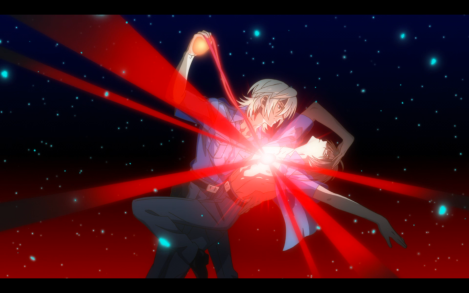 “Take back what’s been taken from you….You and I aren’t so different. We’ll do anything to take what we want.”

One of the first lessons we teach children is the idea of sharing, or selflessness. It’s much better to share something with one another than claiming it all for yourself; there’s more happiness and a chance to truly bond and create friendship with another person.  The concept of it seems so simple, and yet somewhere along the lines, as we grow up, selfishness hardens and becomes necessary. In a world where only the opportune, bold, and conceited win, one has to find a way to live their own life without being taken advantage of. We all have our own desires and wishes. But what’s preventing us from taking action on achieving those desires and wishes? Is it truly so impure to want, and act upon wanting, even if it means that someone might have to suffer for it?

Kazuma is an interesting case of this rule, because from the get go, it seems like he has a rather decent life. His family cares for him and his little brother, and he clearly has good friends and a normal life at school. One could go as far as to say that on the surface, Kazuma appears to be like any other middle schooler, but as with any Ikuhara show, there’s far more beneath the surface, as it’s revealed last week that Kazuma has a very deep connection with his little brother, going as far as to dress up as Azuma and take selfies. This week it’s shown that this isn’t a recent development: in the past, Kazuma is so far pressed to appease his brother that he was willing to steal a cat from the neighborhood, simple because Haruka asked for one. 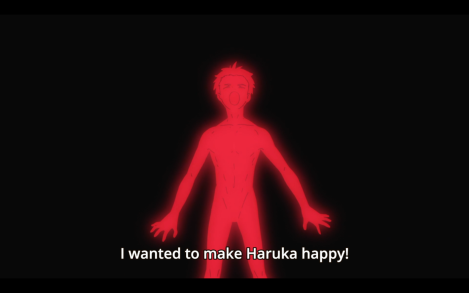 It’s a fantastic example of how love drives us to do unhealthy, self destructive things, and while the exact cause for Kazuma’s behavior has yet to be explained, it reminds me of Kanba’s relationship with Himari back in Penguindrum. While the justifications for Kanba’s eventual involvement with terrorism were not good, they were backed by a single driving force: romantic love. Kazuma’s drive on the other hand, doesn’t seem to be due to romantic reasons; rather, they once again seem to be framed as obligations rather than desires. These obligations, however, stem from a very basic desire: to connect with Haruka, out of what is most possibly familial affection and love.

Ikuhara explores this connection this week through a very particular kind of bond – one has with pets. In this case, the pet is cats: cute, charming, and also incredibly independent and stubborn. Nyantaro in this case swallows up some weed (nice), leading to a ridiculous chase as Toi and Kazuma try to find him and bring him back. It’s a charming scene the two have to pair up to hold hands and act as lovers while running around in a theme park, but it’s also a reminder about sharing, in a very odd way: Toi and Kazuma originally are connected by the kappa incident, and here they have contrasting reasons as to why to find Nyantaro, but they’re sharing each other’s presence and drive to achieve the same goal. 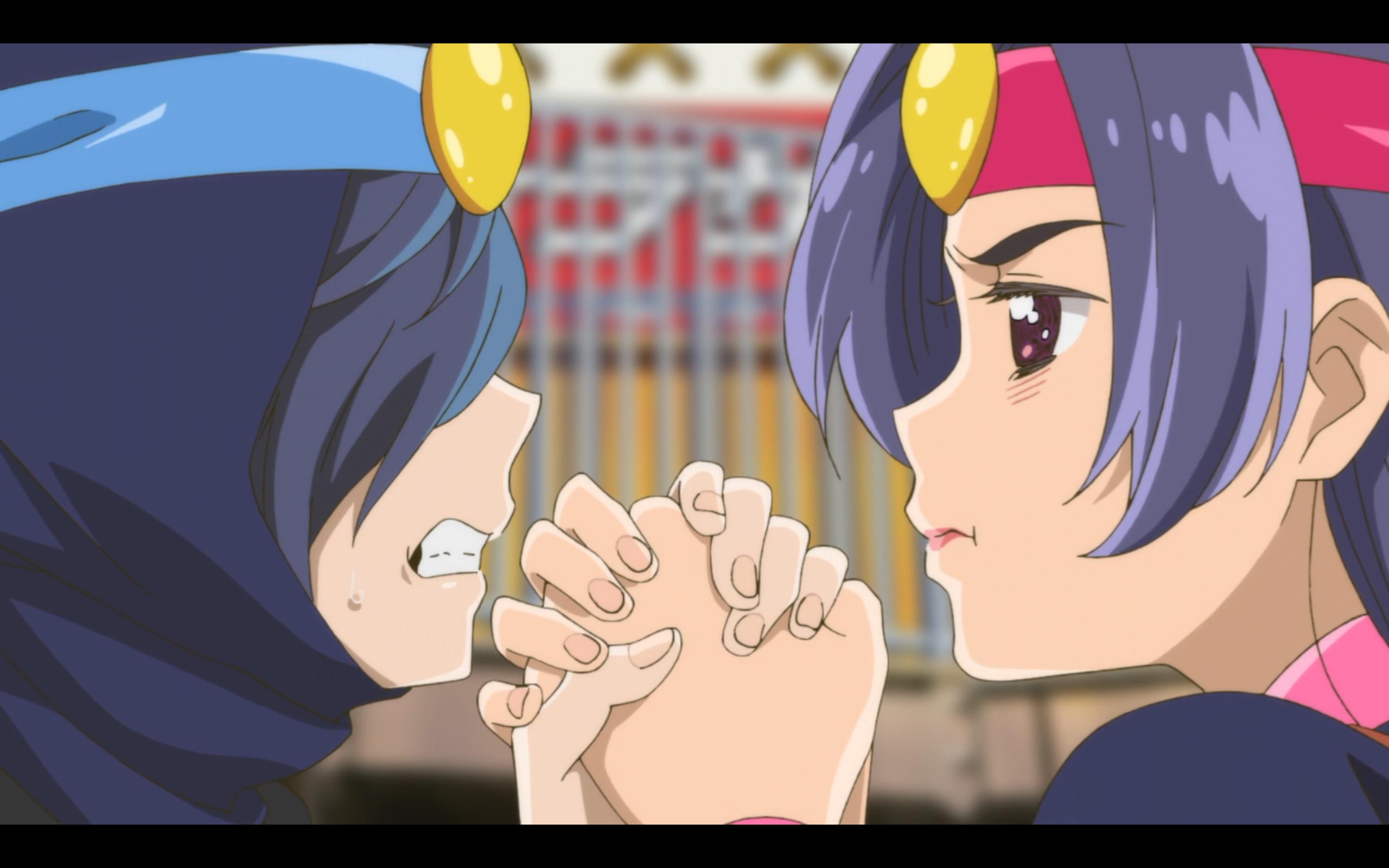 This ties back briefly with Toi’s own desire to connect with his brother. Whereas Kazuma’s life is defined by order and general affection, Toi’s is defined by disorder and loneliness. He doesn’t seem to go to school, and instead is a part of his brother’s gang-like life, going as far as to break into vehicles, cultivate and sell marijuana, and torture people for information. In contrast to Kazuma’s seemingly-perverse methods of obtaining whatever his brother desires, Toi’s methods are almost unsurprisingly in line with his lifestyle; his box after all, contains a gun. It make sense then, that Toi has no shame about his methods of appeasing his brother, whereas Kazuma continues to bury his feelings. Both act upon wanting, and take as a result, but only one of them seems to feel guilt for it. 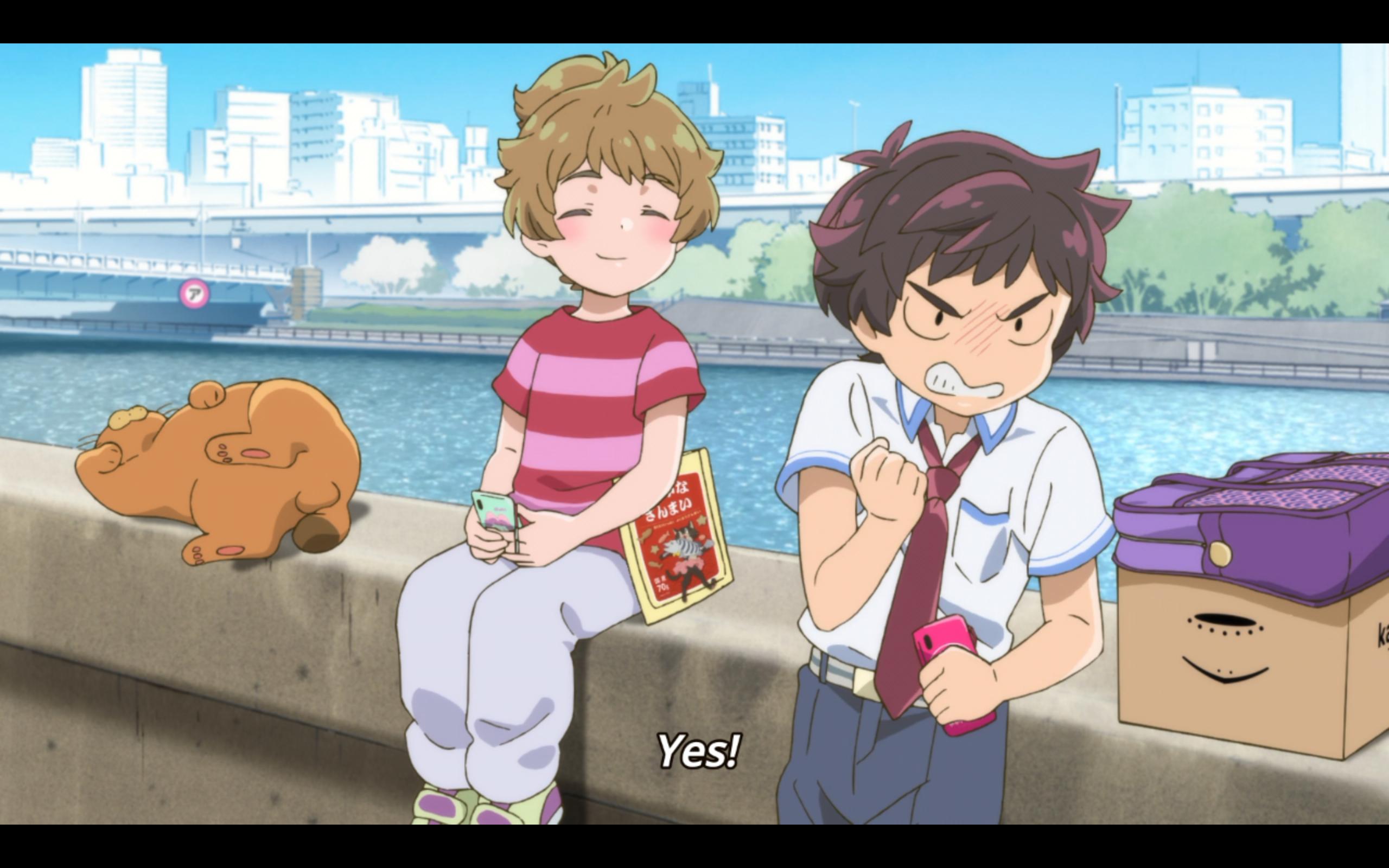 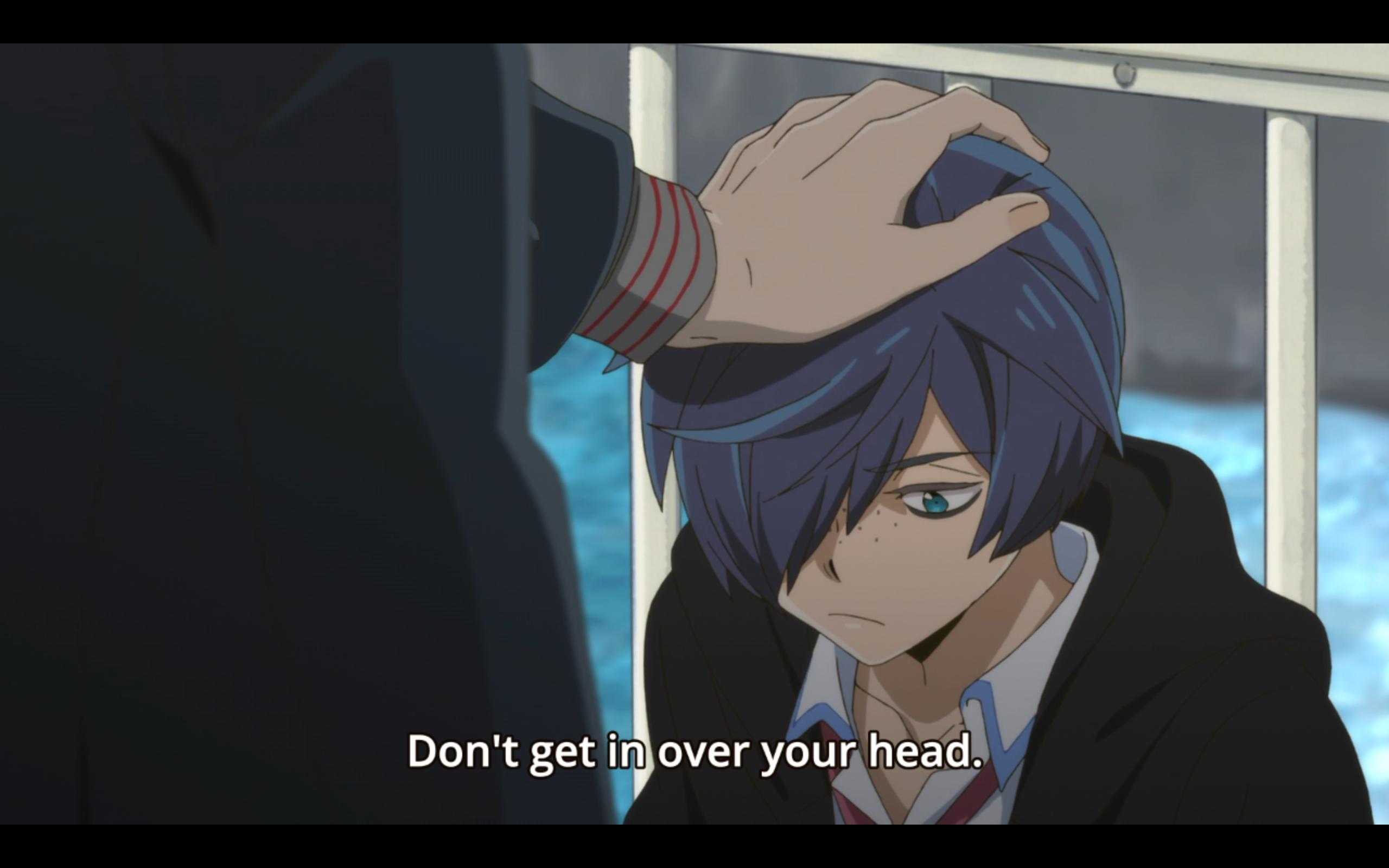 This lastly brings us to Enta, who is a complete disconnect from Toi and Kazuma’s lives. Unlike these two whom are driven by familial duty and obligation, Enta is the one who’s driven by romantic affection. But unlike Toi and Kazuma, he willingly does not take. He keeps his own selfish desire to himself, as seen in the final moment of the episode, where it’s revealed that he’s in love with Kazuma. This isn’t necessarily a revelation; Toi’s box contains a band, which nearly matches the one Kazuma wears on his leg. Color-code wise, he represents yellow, which is a dissociation from the typical blue/pink contrast we see so often in media to represent femininity and masculinity.  As to how Enta’s feelings and inability to act upon his desire affects his bond with Kazuma has yet to be seen, it’s clear that the three all have their own emotional baggage that they have to confront in order to truly connect. 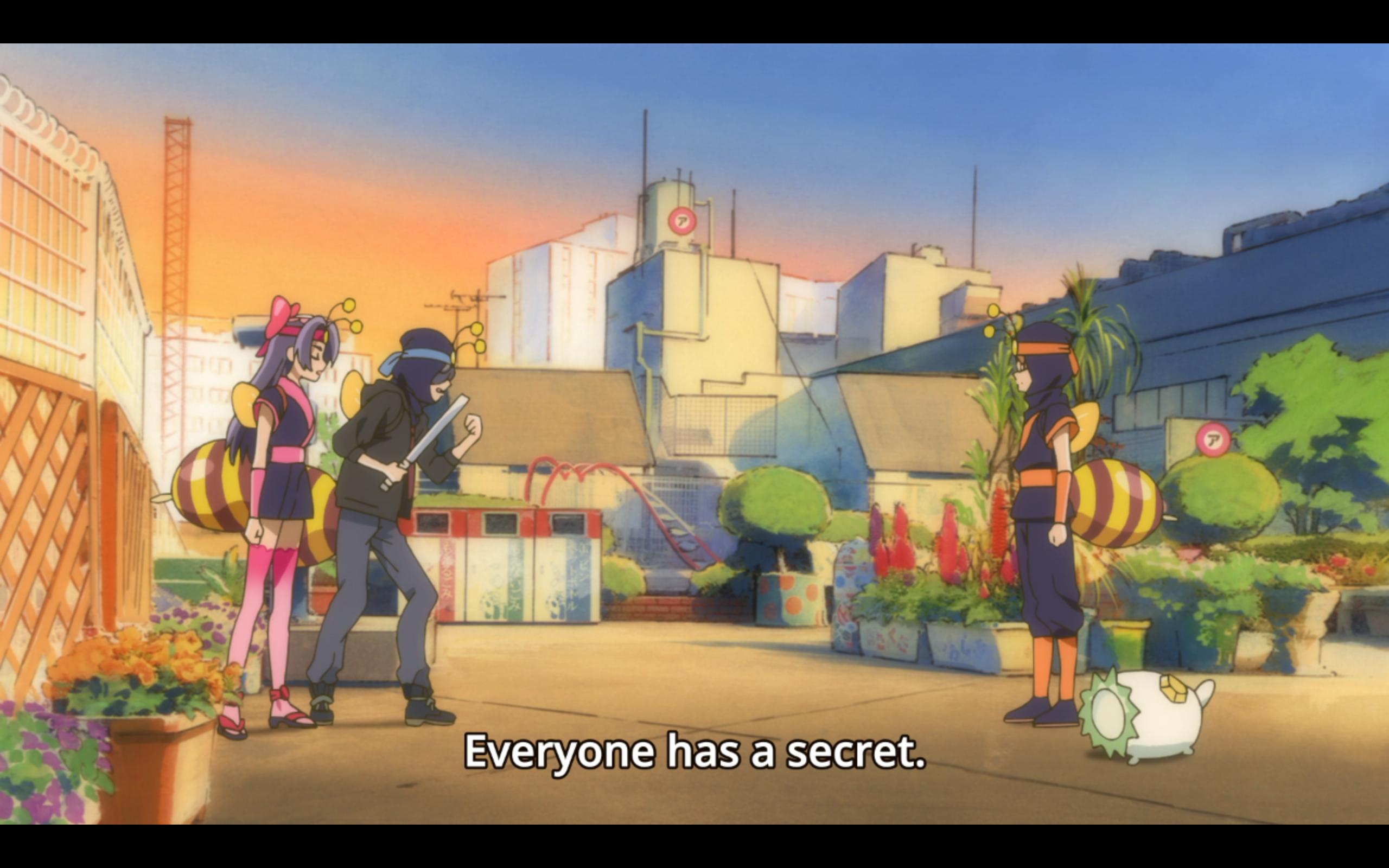 On the other side of things, our mysterious duo of cops returns yet again, though this time to perform an alluring dance that also seems to function as the metaphysical transformation of this week’s victim into the Cat Monster. 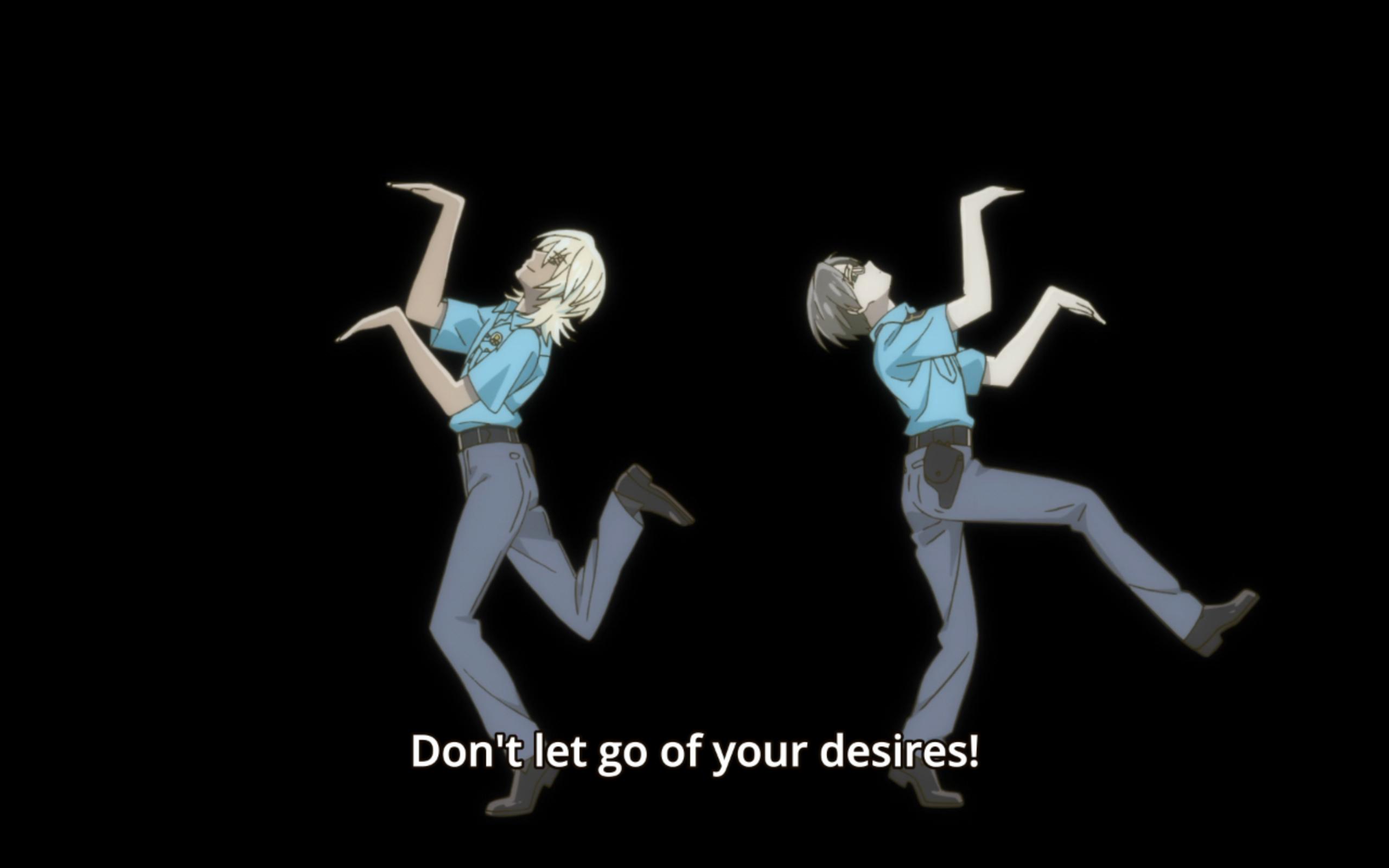 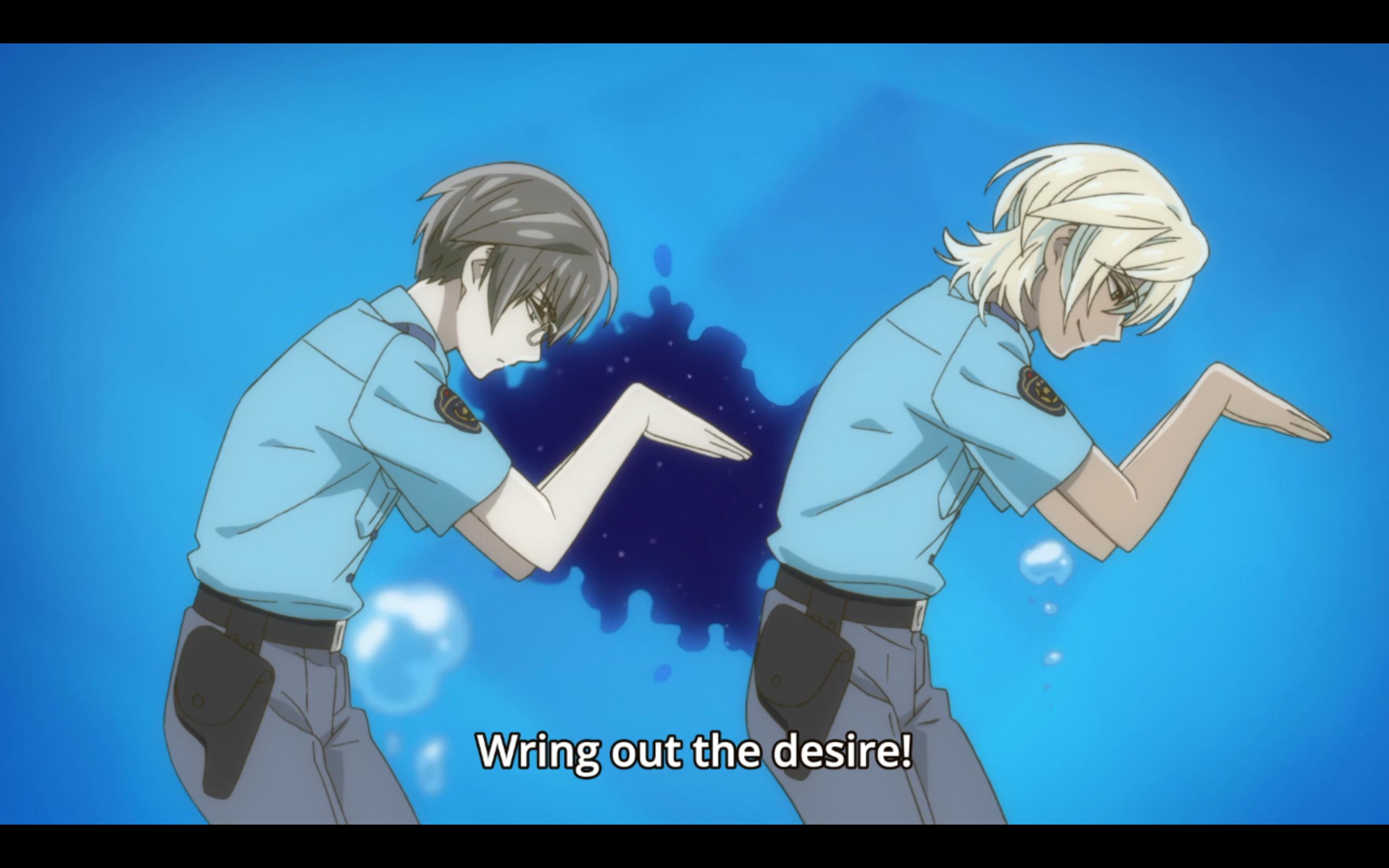 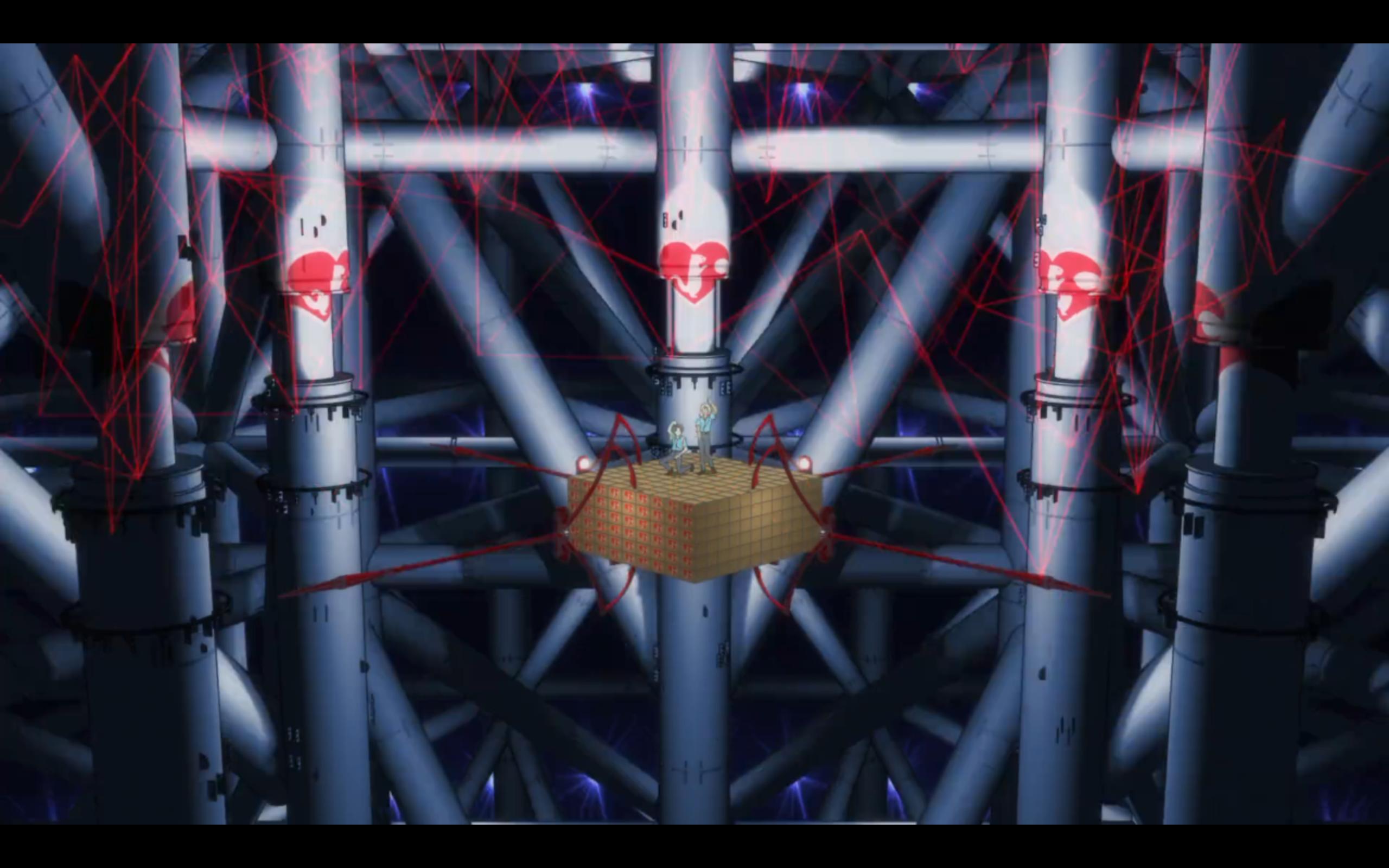 While seemingly just performing their jobs and delivering ‘justice’ in the form of encapsulating the transformation process (which bears an unmistakable similarity to the boxes and terrorism ideas behind Penguindrum), there’s something to be said about the cops’ drive behind their actions. Their relationship is explicitly framed as sexual and almost parasitically codependent, but unrestrained and untethered by any social norm. This is in direct contrast to our trio’s desires which are framed as childish and almost innocent to a degree. It’s clear that these two are on a different level; they relish in their play, feed off of each other’s love, and bare for all to see. It would almost be heroic if it weren’t for the fact that they may be directly feeding off the extraction of other’s desires and impure dreams; in this way, the cops’ lifestyle mirrors those who are opportune, bold, and charismatic. They do not share. This doesn’t necessarily mean that they take only for themselves (it seems like they bear a connection to the kappa, potentially the kappa-like icon that belongs to Azuma), and their intentions may be good hearted after all, but for the time being, these two and their interactions only seem to be doing harm, as Nekoyama’s corpse is found in the river.

And yet, there is something almost too luxurious about the situation. Ikuhara’s works have often taught us that to achieve a deep connection with someone, something of great value must be lost, or sacrificed. As to what challenges and obstacles the cops have had to overcome to reach their current status remains unknown, but I’m only more excited to see how this duality plays out.

“Only those who can connect desires have a future.” 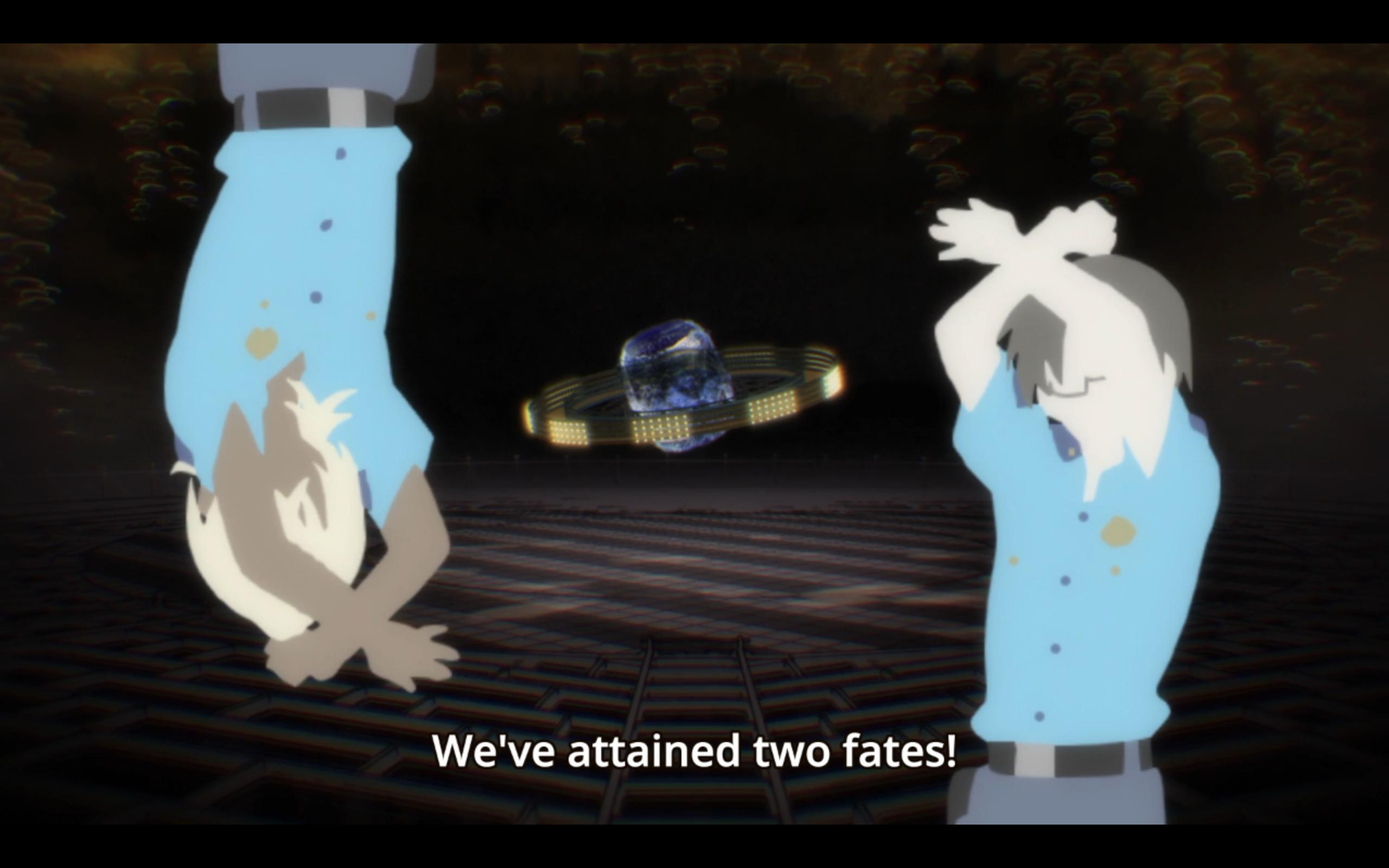 As opposed to the symbol of threes, which usually represents balance, the symbol of twos in Ikuhara’s stories often correlates with a symbiotic or parasitic relationship (see: Utena).