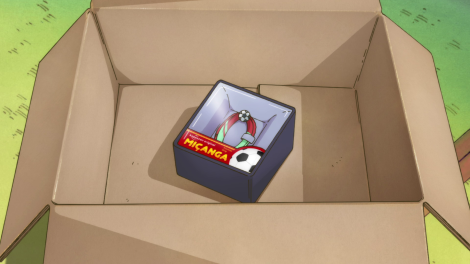 Ikuhara is my favorite anime director, and the quality of his direction that has drew me into his anime over and over again was the subtlety with which he can weave story, symbolism, and metaphor into a layered and rich narrative that stands the test of time. To my surprise and delight, Sarazanmai‘s treatment seems far more direct and high-octane, while preserving the richness of the visual narrative.

Sarazanmai gets straight down to business, tossing Kazuki, Toi, and Enta straight into the unreality of the “Field of Desires” — a limbo where kappa zombies attempt to devour desires to satiate themselves. The desires in question are our deepest and darkest desires, the ones that we shove deep down and box up to avoid thinking about and confronting, like a fetish for stealing boxes and wearing them on your head while naked or cross-dressing and pretending to be a local idol to make your sister happy. And quite frankly while both of those things reek of unplumbed depths and hidden meaning they are not what interest me.

I’m interested in why Enta’s apparent deep and dark desire at risk of being devoured is… a gift for Kazuki that Enta feels he can no longer give to Kazuki because the former quit the soccer club. If it were as simple as that, then there would be no reason to box it up and hide it. As atelier emily has already analyzed, the objects within Enta and Toi’s boxes are icons, simplistic representations of important relationships in their lives. But while Toi’s icon points to a complication relationship with someone involved in criminal activities — something worth hiding and/or being ashamed of —, I see no reason for Enta to want to hide his relationship with Kazuki. After all, Kazuki’s box has nothing to do with Enta.

So this is where I put on my tinfoil hat and say that Enta has romantic feelings for Kazuki. Otherwise, why would Enta feel shame or self-loathing with respect to his relationship with Kazuki? All I can say is that the only time I’ve felt self-loathing like that in with my relationships with the guys I’ve harbored romantic feelings for. And given Ikuhara’s historical exploration of same-sex relationships between women in Sailor Moon, Revolutionary Girl Utena, and Yurikuma Arashi, I don’t think it would be unrealistic or unexpected for Ikuhara to explore that in Sarazanmai.