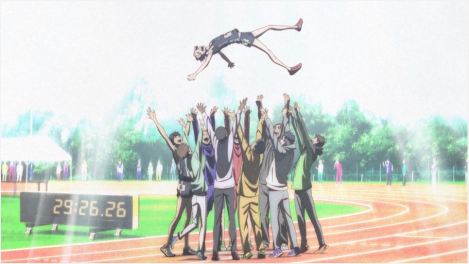 High school was a tough time for me. I moved from the Philippines (where I had a small but tight group of friends) to the United States (where I knew almost nobody at school.) Classes were much tougher than I was used to. Worst of all, my depression really started kicking in around sophomore or junior year. In hindsight, what kept me going in those early years of high school were the friends I made on the cross country team. I was a decent runner—just barely good enough for the tail end of varsity, not as fast as I could have been had I practiced more. The physical and psychological stress of races terrified me. But being part of the team made it worth it. I could stay in the middle of that amorphous group of joking, slightly masochistic, constantly stressed out students and feel like I had a place somewhere.

My favorite thing about long distance running as a sport is how equitable it is. Anyone, at any skill level, can gain from it. Novice runners who can barely jog a mile will improve by leaps and bounds so long as they train consistently and don’t injure themselves. Runners who are skilled have their own fastest time to batter against in each race. But more than that, each race is a team effort. Each runner behind and in front of you is part of a great invisible web that you are a part of, something to lean on as much as it is something to transcend. Your neighboring runners in a race are a goal, a warning, an enemy to defeat and a silent friend who will be there with you as you struggle to outrun your own body. 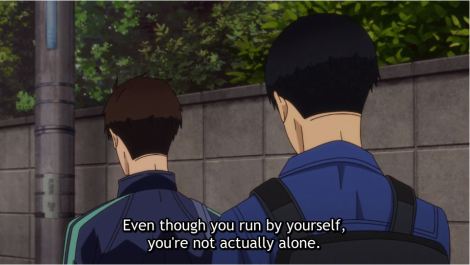 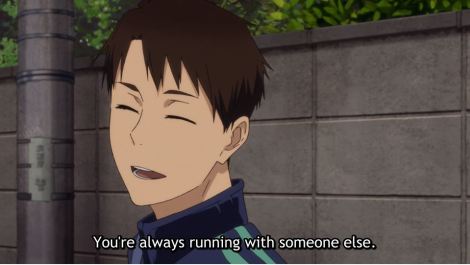 I think the reason I’ve enjoyed Run with the Wind as much as I have this year is how perfectly it captures this spirit. It’s partly the familiar story of an ace who needs to learn to work with his team to find success in his chosen sport. But it also gives you a range of teammates of different skill levels to identify with, each with their own important character arc. Are you a prodigy fighting to run without fear? A skilled veteran recovering from injuries? An older man running to improve his declining health? A complete novice who can’t run for shit? Some of these characters are better runners than others, but I wouldn’t say that any of them are less “important.” Each has something others lack, just as they have key weaknesses that are covered by their teammates. Prince is a far, far worse runner than Kakeru—to a comical extreme!–but the way he comes to understand the pain his body experiences when he runs grounds him in a way that anxious, self-hating Kakeru lacks. After all, running can be about being the best, but it is about other things too.

Mostly though, it’s about Prince

Run with the Wind is only halfway over, and the team’s goal of Hakone remains out of reach. But I’m impressed by how generous the series is with its evocation of team spirit, and how it gives each member of the cast time to grow and evolve. That’s distance running in a nutshell: it pits you against your own limitations in a grueling fight to the finish, but it’s never just about you.