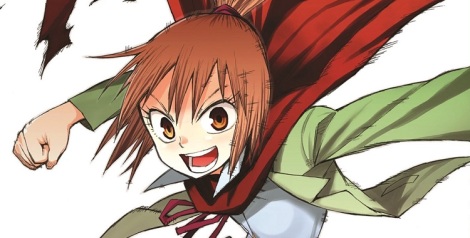 When I first found out about Planet With, and that the anime series was going to have direct involvement from Mizukami Satoshi, my first thought was: “FINALLY! He made it.”

And then my immediate second thought was: “Why isn’t this Lucifer and the Biscuit Hammer?”

But in my head I knew that even if any of his finished manga series were to be selected for an anime adaptation, Spirit Circle would have been the best choice to adapt out of all of his works. It was perfectly structured — every arc wonderfully executed with the right amount of drama, comedy, conflict, and world-building — and it finished with an incredibly satisfying ending, especially for fans savvy to Mizukami’s previous works. But there was a very selfish part of me that really wanted a Biscuit Hammer anime simply because even if Spirit Circle was his best work, Biscuit Hammer was my favorite.

SPOILER WARNING FOR THE ENTIRE MANGA. If you want to read the series fresh and with no expectations, please turn back now.

There are certain pieces of media that you watch or read at a specific point in your life for it to be an emotional and formative piece of work, otherwise someone would look at the very same work that moved you so strongly and go “Eh, I don’t really get it.” For me, that formative work was Lucifer and The Biscuit Hammer, and that specific point in time was when I was 17, just finishing my first year of college and experiencing the heaviest brunt of depression I’ve ever had in my life. The details of it are personal and I’m not yet ready to elaborate on it, but at that point I was a bit lost on who I was and what I wanted to be, and I barely cared about what happened to me or my health.

So the me back then, who constantly had dark intrusive thoughts and anti-social moods, was immediately intrigued when Biscuit Hammer’s heroine, Samidare, had turned its “defeat the bad guy, save the world” premise around by promising to destroy the world with her very own hands once she beats the Big Bad who called dibs first. And then the series’ protagonist, Yuuhi, bowed down in front of her in loyalty and servitude, vowing that he would help her in every step of the way.

I was rooting for them. I had wanted them to win. I wanted to know what would happen at the end of the world. But as the series went on and as I kept reading chapter after chapter, my perspective had greatly shifted.

At the time, Mizukami Satoshi wasn’t well known yet around manga-reading circles like it is now so I had absolutely no idea what to expect. The first volume seemed like it was going to be a straightforward subversion of the classic heroes’ journey, only set in a modern era with a very blunt and straightforward tone. But what Biscuit Hammer actually is — and it’s a trait shared by many of Mizukami Satoshi’s works — is a coming-of-age story. Except unlike most coming-of-age action/adventure stories where the protagonist is a child still on the cusp of adolescence, Biscuit Hammer’s protagonist is a college student, still in-between teenager and adult. 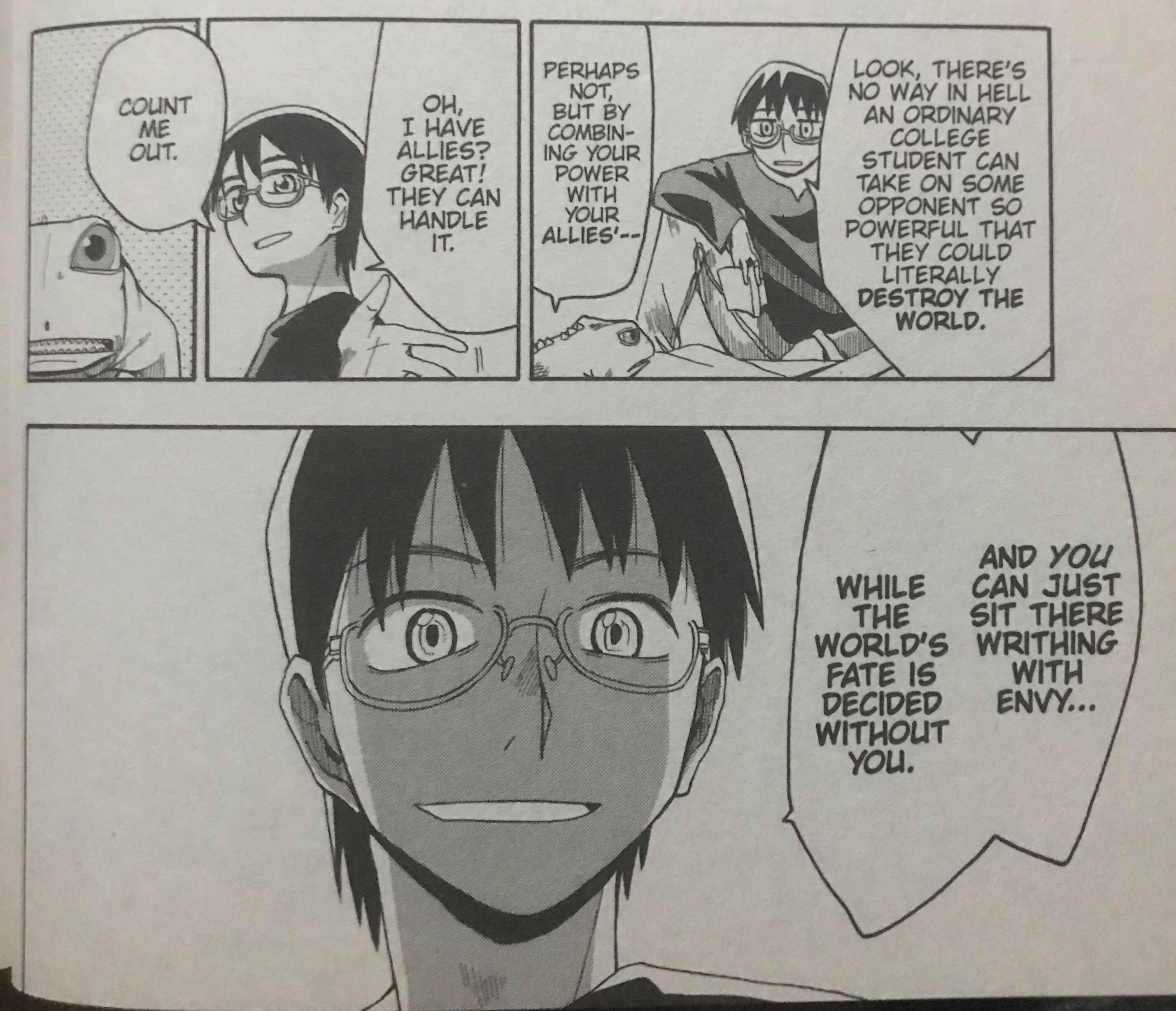 Yuuhi is seen by kids as a mature grown-up, and yet he is treated by the adults in the series as a kid whose angst is the dramatics of youth. He’s already gone through the awkwardness of puberty, but he’s still figuring out what exactly is his place in life and what he wants to do in the future. I could see a lot of myself in Yuuhi, because I was also a college student in denial about my mental health and was looking for some kind of anchor as a distraction from acting on self-destructive thoughts.

And that was why Biscuit Hammer was incredibly comforting to me, because just like Yuuhi, I couldn’t see what I wanted to become. My future was behind a thick black curtain and I was only going through the motions of what was expected of me until I got there. And just like Yuuhi, I learned that it was okay to feel lost, scared, and unsure about you want to do with yourself and your future, because that was just a natural part of growing up into an adult.

While Biscuit Hammer explored the meaning of adulthood through Yuuhi, it also dived into the meaning of immaturity in its antagonist, Animus. Animus is very much the opposite of Yuuhi — he’s someone with a clear goal, someone who doesn’t think too deeply about the decisions they make, and someone hundreds of years older than Yuuhi would ever live to be. He’s a man with powerful psychic abilities and an unquenchable thirst for knowledge, and yet, for all the wealth of information that he has accumulated in the hundreds of years he’s been alive, he’s barely matured past 10 years old in his thinking.

Animus wages war against the world multiple times and calls it a game. He explodes in tantrums when all his toys are taken away. He treats the world as nothing more than an over-sized pinata, and the titular Biscuit Hammer is just the bat that lets him crack open the outer layers to get to the goodies inside. He knows almost anything and everything and he’s also older and more powerful than almost anything and everything. He calls himself an all-mighty god, but that didn’t make him an adult in the eyes of the children he was fighting against.

Then there’s Samidare. The Lucifer in Lucifer and the Biscuit Hammer.

Acting as the team’s first line of defense and powerhouse tank, she had been secretly planning on betraying her friends and destroying the world for herself all along. Except, her motives aren’t exactly as villainous as your standard Surprise Plot Twist/Face-Heel Turn Final Boss. She’s just a young teen but she can see that because of her circumstances, there’s nothing waiting for her future. And so in her selfishness, she decides that she will take the world for herself. She’ll take the world by destroying it, because how can something be hers if it’ll still spinning and thriving when she’s gone?

Even though Yuuhi was the character that I related to the most, Samidare was the reason why I didn’t want the world to end anymore. While Yuuhi’s arc was about learning how to become an adult and Animus’ arc was learning that he was just a child all along, Sami’s arc was about realizing that the future is not set in stone. She’s lived her entire life thinking that there was only one endgame for her, and she fully accepted it. She wore an outer shell of optimism and energy because she didn’t want to worry the people around her. It’s only in Yuuhi’s dreams that the audience sees glimpses of her true nature — snarky, childish, petty, and also, incredibly lonely.

It’s a cliche to say that Yuuhi and the Animal Knights are what brings Sami out of the dark lonely world she made for herself, and that her conviction was rocked because their love and friendship was what made her realize what happiness and love really meant. But that’s exactly what happens in the series. It’s common and almost staple in adventure stories to have love and friendship ultimately defeat the villain and save the day, and yet when the Animal Knights combined their powers to reach Sami, when Yuuhi held out his hand towards her, telling her that he’ll always be there for her no matter what, I was holding back tears because I wanted so badly for Sami to be saved.

Sometimes tropes can be so common that seeing them over and over again makes them tiring, but Mizukami Satoshi is such a master at executing cliches that I was won over by this strange group of heroes and their sincerity in wanting their princess to live long and happily alongside them. Seeing the end of the world was not as appealing to me anymore, not when drinking beer underneath the stars surrounded by people who truly care about you is an option.

So yeah, Biscuit Hammer is kind of my favorite manga of all time. I had encountered it when I was in a very dark place, and instead of being a force that enabled me deeper into darker intrusive thoughts, it completely flipped itself around and gave me an immense appreciation for the cheesy, the mundane, the absurd, and the absolutely ordinary. The series taught me that being an adult means you don’t have to know everything — that adults don’t have to let go of the joys they had ever since childhood, that there is a difference between being young-at-heart and childishly immature, and that there will always be opportunities for you to be happy even if you think that you’ve got nowhere else to go.

And the most important lesson I’ve learned from Biscuit Hammer over the course of the series’ publication, as I read how much the characters had grown in their arduous journey, is that you win fights by yelling your punching attack out loud and then actually kicking your opponent in the face.

One response to “Mizukami Festival: How Lucifer Changed My Life”