We are too complex to be satisfied with simply living. The need for patience and perseverance may be meet with chagrin.

How do we value ourselves? Is it in the relationships we form through the years? The choices we make every day, and then us owing it up to ourselves for the consequences of those choices? If we fall, do we bandage the wound? Do we let it bleed a little? Can we keep a secret? Can we tell a secret? At our base, is self preservation all we can truly cling to?

In the mystical lands of Land of the Lustrous, self care is a duty, not a desire. If the gems have to powder themselves up, it’s to keep their microorganisms alive. If they need to go into the sea, they’ll lather themselves in resin. If they break, they slowly piece themselves together, without the concept of pain, fear, or death. If they have to make a new design for their attire, it’s for battle purposes. Agency isn’t a thing that exists for the gems, but it is for Phos as they learn for the first time what pain is.

Body autonomy is a strange junction between consciousness and lack of self awareness in the world and mind of a Gem. Because they don’t perceive death and permanence in the same way humans do, the concept of value is driven relentlessly through the ideas of merit and inherent traits. Those with the strongest hardness are the most valuable for their fighting skills, while those with lesser hardness must find other tasks to fulfill. For the most part, everyone but Phos and Cinnabar have found their place in this society. This doesn’t mean that they don’t have doubts – Diamond is a clear example of this from the previous two episodes. But no Gem truly feels the anguish of loneliness, of not belonging, of being inherently broken, like Cinnabar and Phos. It is then even more fitting (and tragic) that out of all the Gems we have seen so far, Cinnabar, and mostly Phos, are the ones who break the most. And I don’t mean that they are brittle, fragile creatures that just happen to be in the wrong place at the wrong time.  No, they let themselves be broken.

This carries a lot of weight in a world where Gems are prized for their beauty. Hunted for their bodies, it’s clear that the Lunarians have no qualms about slowly dissecting these ‘things’ for purpose of reconstruction but also functional purpose and beauty. For the Lunarians, self care is an inherent desire. They crave it, devour it, reformat it for their own wants. They crave to crave. To give into themselves, and reach higher limits. Despite being the hunters with the most power, however, they too, lack autonomy. Sure, with their insidious hive minds and habits, they may act like impulsive human beings, but they lack the meditation and anguish needed to really be one. We can trace this back to a similar set of traits the Lunarians share with the Gems: they also do not fear death, destruction, or permanence. While the Gems have absence of selfishness and autonomy, the Lunarians almost make up for the latter with an excessive amount of the former. Perhaps that’s what we find so terrifying about their existence: they persist like a virus. If you kill one, another takes its place; they are a corruption held at bay. 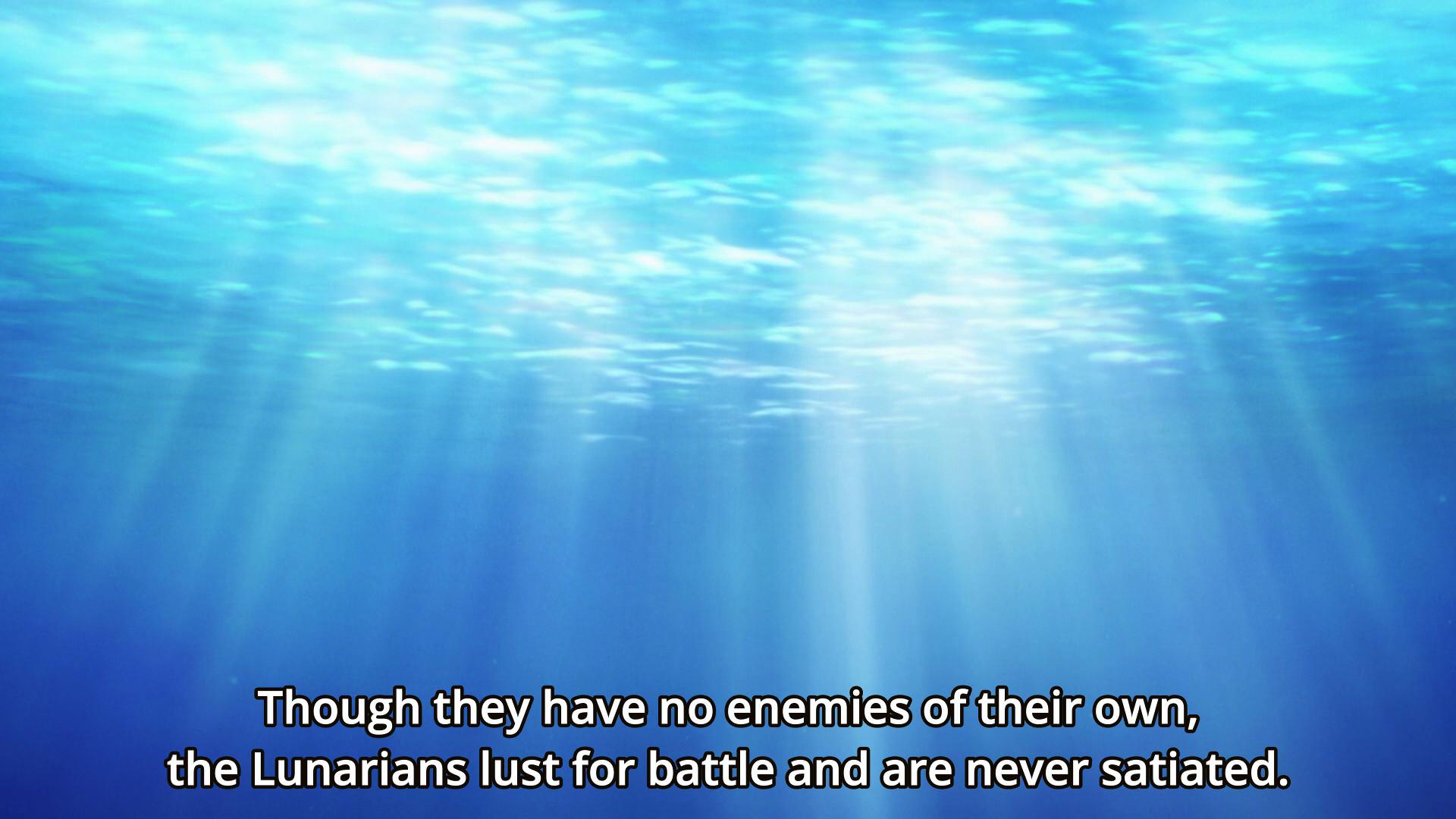 This is in complete contrast to the Admirabilis, whom seem the most balanced out of the three. Ventricoscus seems fully capable of both reasoning and selfishness, but not at the cost of self preservation. If anything, Ventricoscus looks out for herself very often – from her appearance to her role in negotiation, her focus on keeping herself and those close to her alive are layered in thoughts both rash and well planned. She completes her profile with her moral compass aligning with neither the Lunarians nor the Gems; after all, the existence of her entire species is at risk. 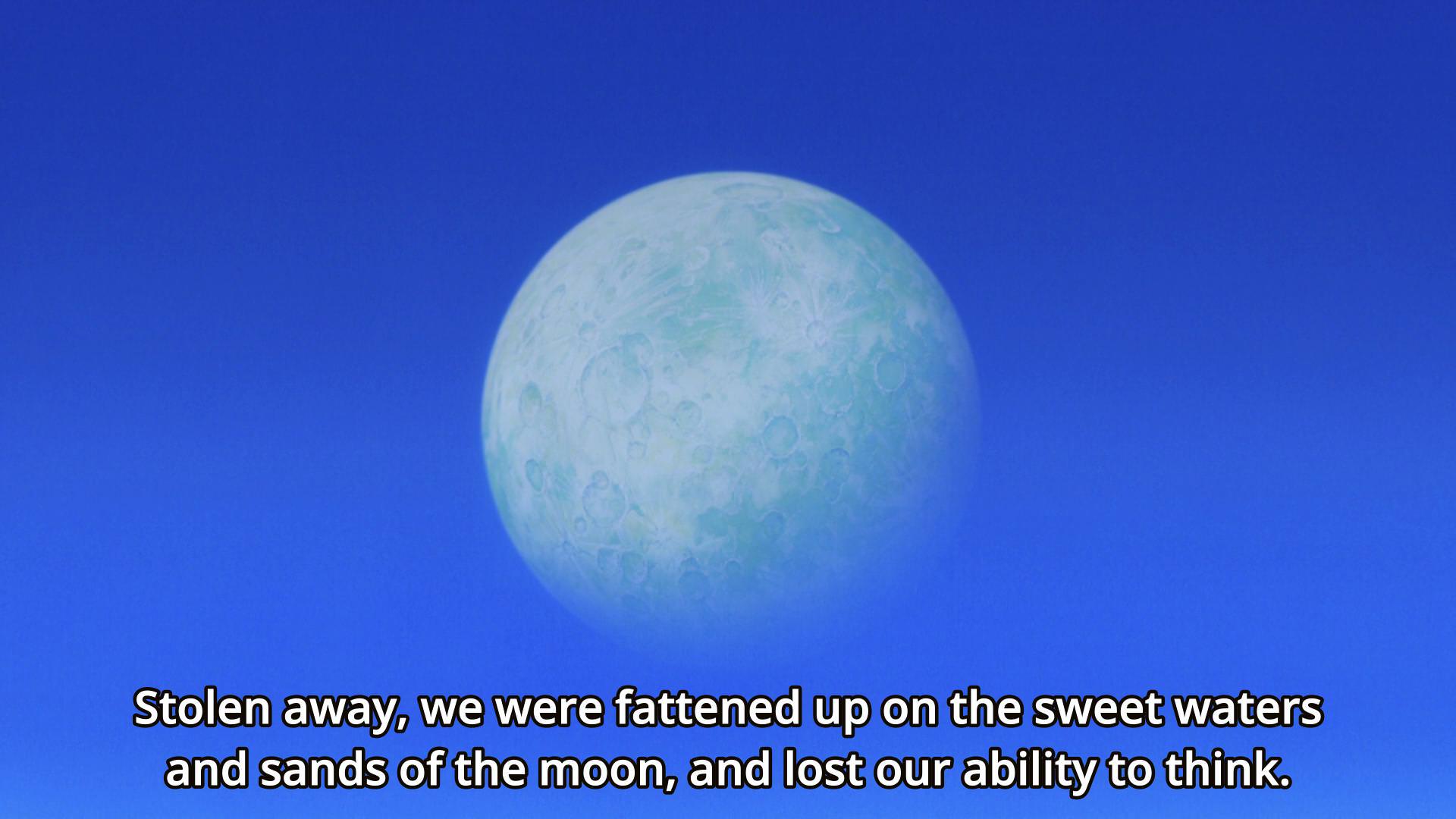 Despite this, Ventricoscus is contained, just like the Gems, through the persistence and power of the Lunarians. She even has a greater constraint – death. It gives her motivation a color that Phos can’t compete with, even when they go through with the negotiation for the sake of Cinnabar. But perhaps, through all the suffering, Phos is able to understand one thing – the pain and power of agency through loving someone else. 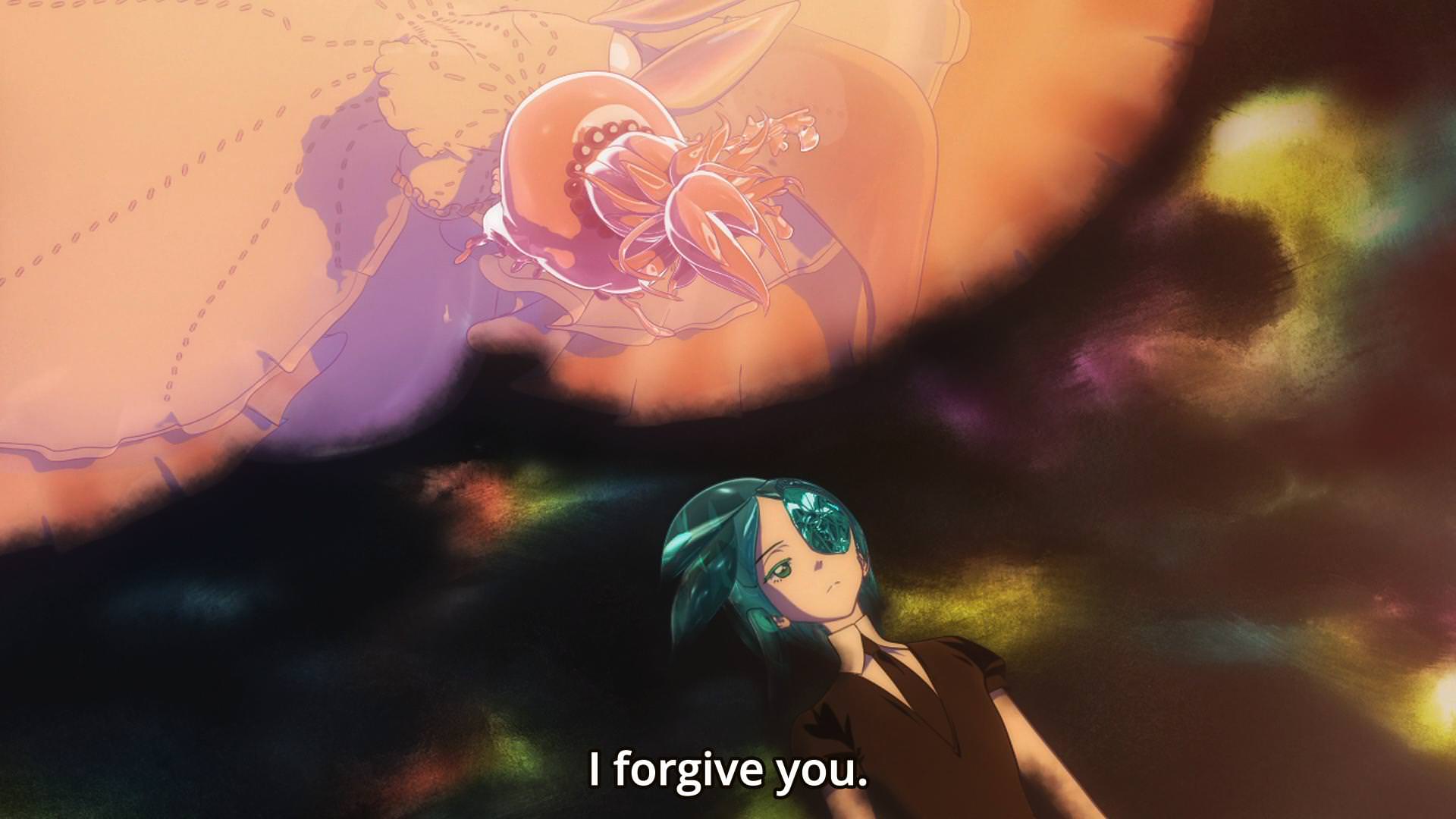 The lack of body autonomy present with Phos and Cinnabar can be directly linked to minimal amounts of self awareness and agency. In a merit-based society, the concept of continuously sacrificing oneself for a greater cause can be called heroic. In Land of the Lustrous, it is nothing short of self destructive, precisely because it is selfish. While most of the Gems in society work toward a communal goal, Phos consistently beats against the waves of a hive mindset. It stems from an inherent need to prove oneself – once again, a feeling that isn’t uncommon, as seen with Diamond – but what makes Phos’ actions so degrading is the fact that they do it all for the sake of another Gem. In an attempt to carve out one’s hollowness, Phos (and to an extent, Cinnabar) gain agency, but at the cost of self determination. Because they cannot comprehend the idea of self care, they persist in self destruction. It’s a selfishness Ventricoscus can understand and familiarize with, but it also surpasses the realm that Ventricoscus lives in. A permanent, deathless world is one where risks have no meaning and can get lost – for Ventricoscus, that’s far more terrifying than death and loneliness. It’s not empathy she feels for Phos at the end of their negotiation; it’s pity, for the struggle of a life that lives a zero sum game. 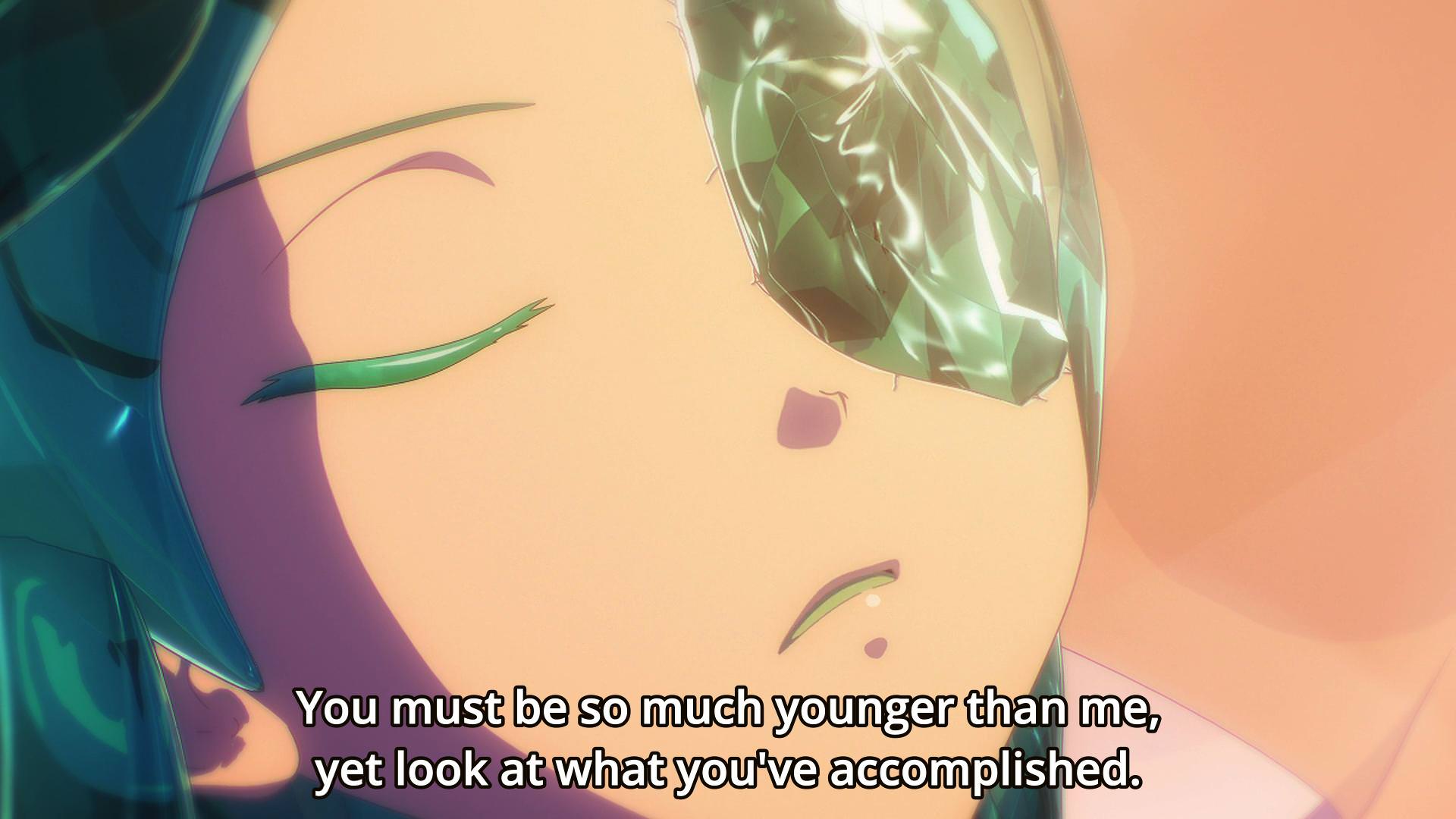 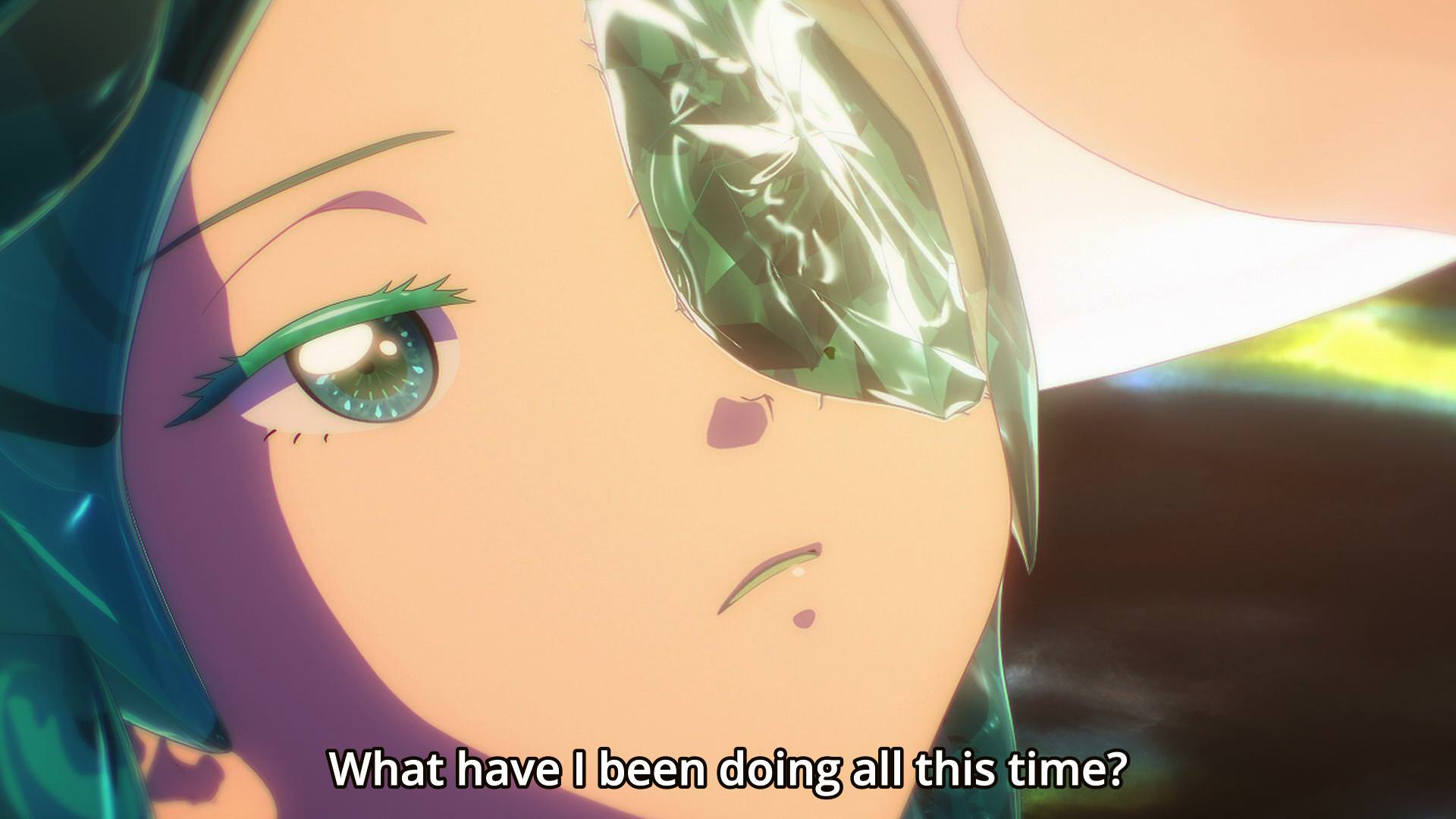 It’s a pity we share with her. In the span of two episodes, Phos is willing to be broken, sold, negotiated, and truly ‘killed’ for the sake of another. Cruelly, they are given no reprieve, not even in death; they wash up the next day on the shore, just as useless as before. “I’ll try harder tomorrow,” Phos echoes to themselves. No one is crying here, but no one really needs to – the pain is palpable, in the form of Phos’ empty expression, the discarded eye, and Cinnabar’s acidic droplets. Not worth for death, negotiation, nor friendship, Phos once again lies stranded between worlds, unable to undergo the  metamorphosis they desire. It’s a stagnancy too cruel for even the most brittle of Gems. Phos can make conscious choices, and in gaining something worth fighting for, they separate themselves from the rest of the crowd, but without restraint, any emotion is a poison. Here, it’s just an exaggerated form of the loneliness Phos is trying to cast away – reflected right back into the mirror of Cinnabar, whom actively chooses to alienate themselves as a silent death wish. 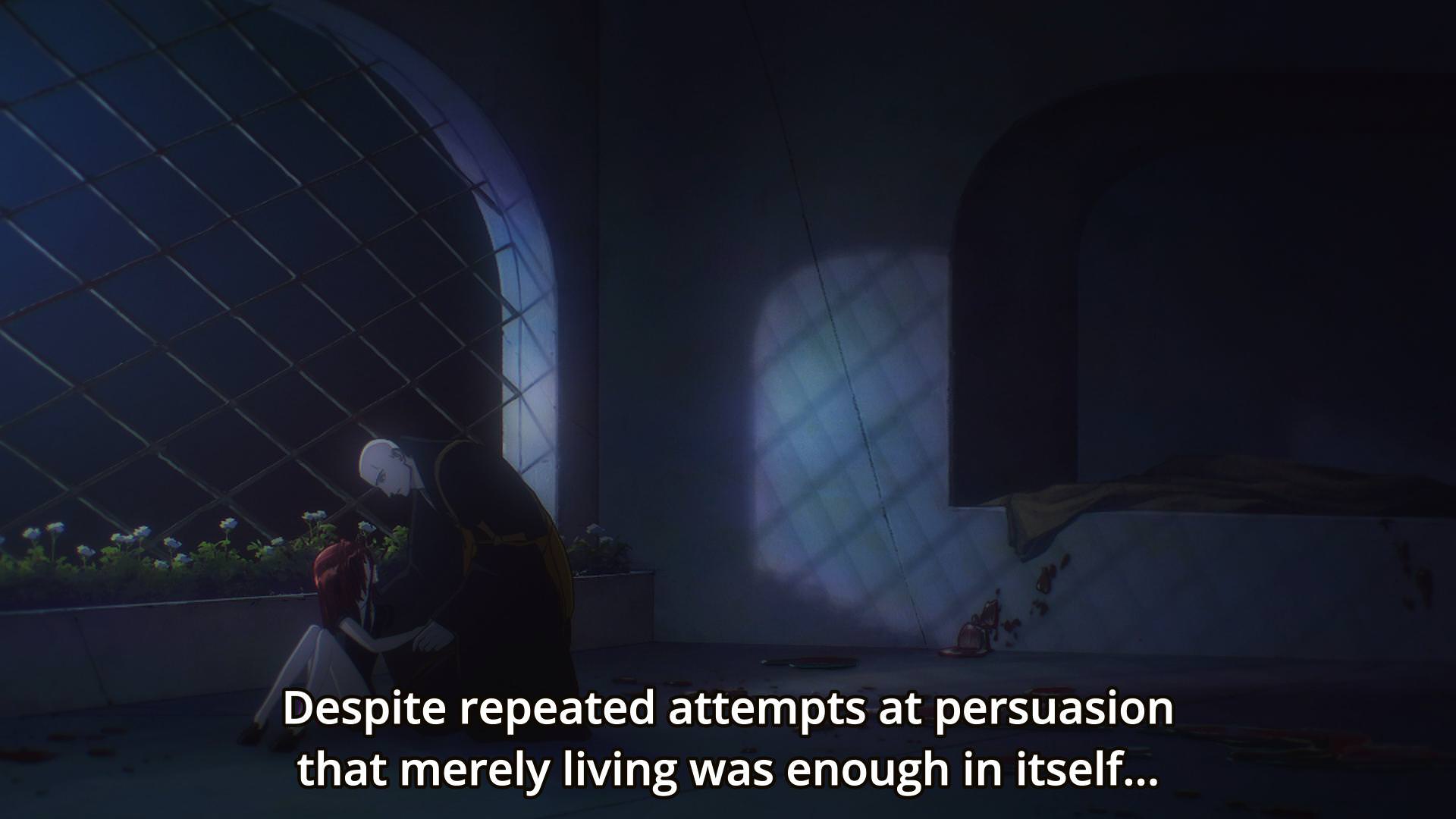 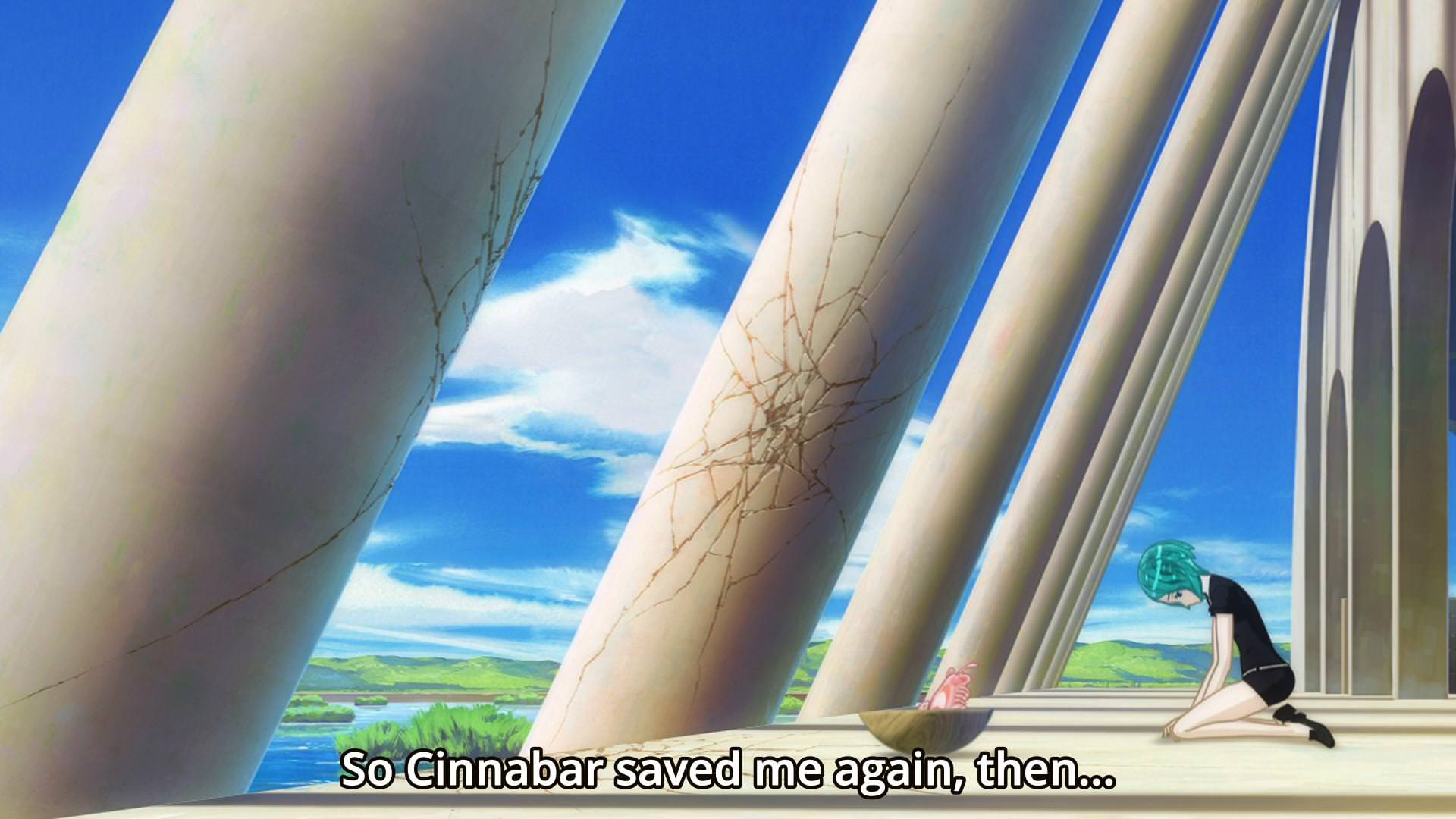 In the end, it seems like Phos and Cinnabar are so desperate to change they only end up pursuing repetitive and destructive methods to do so, and in the end, only amplify their loneliness. Both want to be saved by the other, and yet, can’t stand it.

Despite these tragic outcomes, if there is a silver lining in all of this, it’s Phos being able to bounce back stronger with a new set of legs. They’re able to run much faster which may be the final push to get them to be in shape for fighting, but it also comes at a severe cost – Phos loses one third of their memories, and isn’t able to remember some of the other Gems. Sure, they’re the youngest, and this is brushed off as nothing too terrible, but it begs the question: How far is Phos willing to go for the sake of the ones they love, to the point where they aren’t Phos? At what cost do we give up our own nature for agency? In the end, is there any autonomy at all? Or is the only thing that really awaits us is yet another gaping void of loneliness? 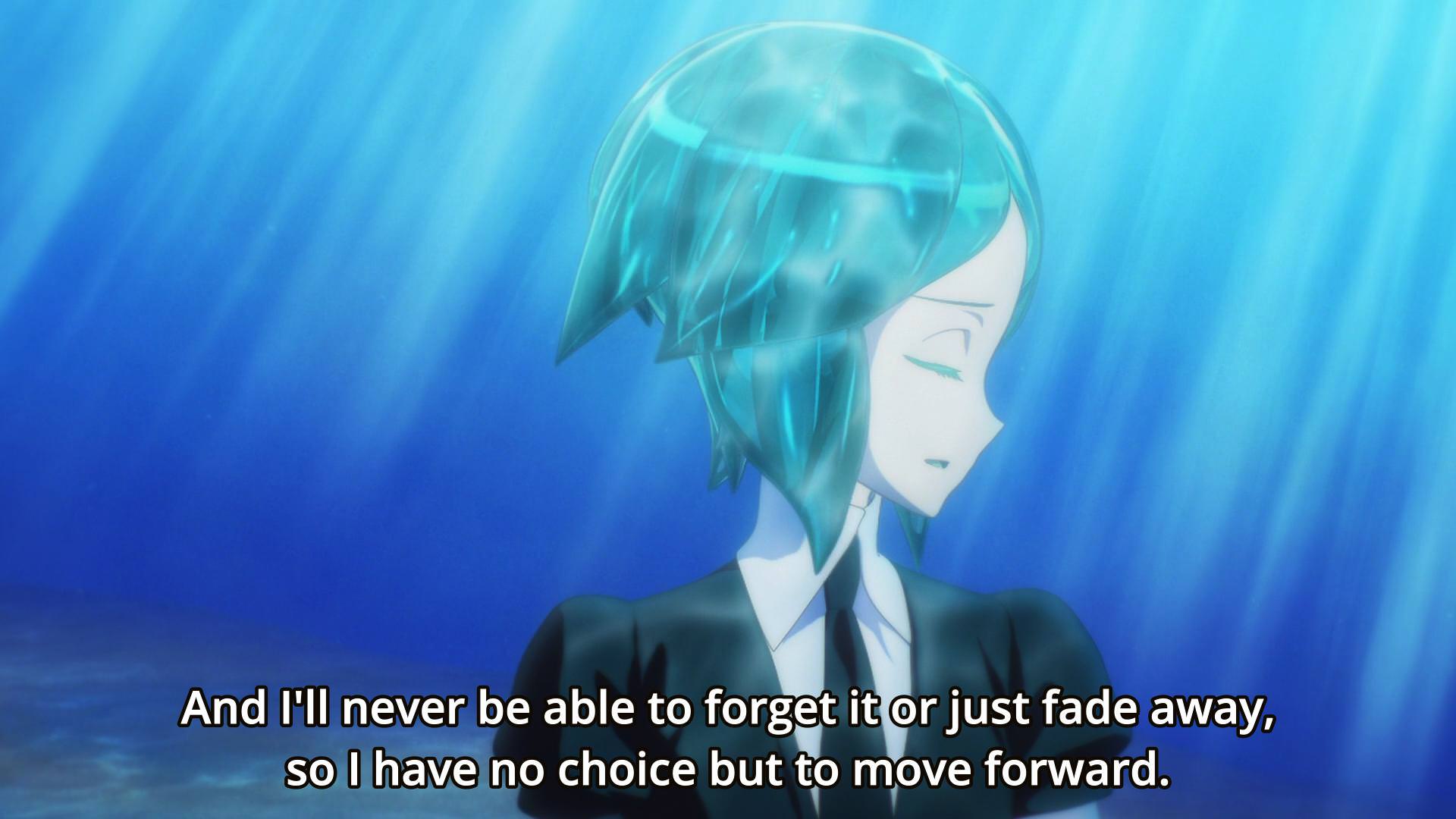 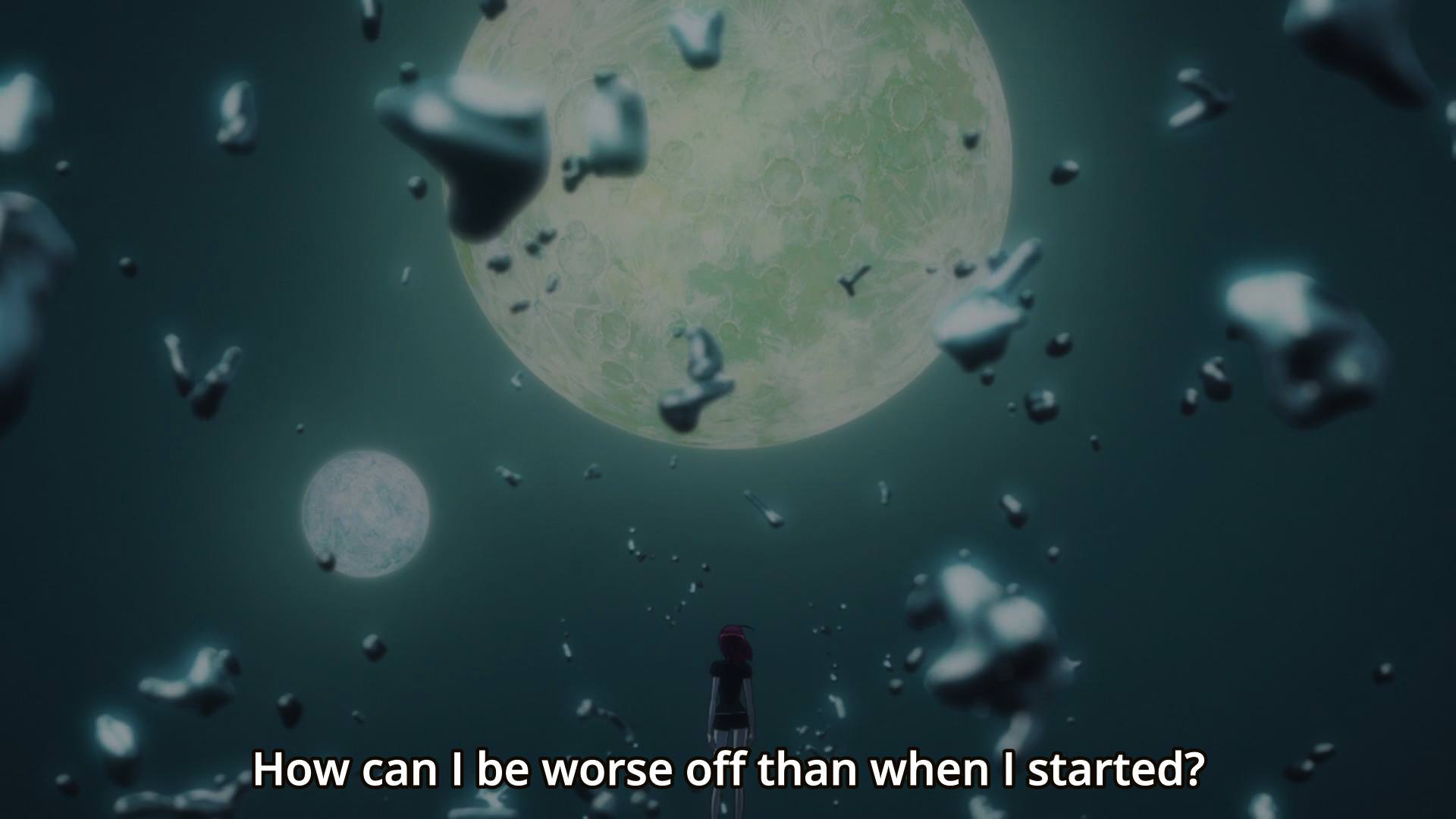 One response to “Unworthy; Land of the Lustrous, Episodes 4-5”