In Land of the Lustrous, the sky is always beautiful. It’s always there, hovering above our characters, as they reach out to it, talk to it, and fight below it. Day and night falls, but the sky remains. Here, time doesn’t exist.

There is a pervasive emptiness that inhabits the world these gems live in, but it’s an emptiness that can’t quite be explained. It’s clear that they all feel it; whether it’s through the hollow rings of tapping a hammer against their bodies, or through the continuous plains and fields, there is something missing here. It’s a void defined by the presence, rather than absence, of substance. Diamond tries again and again to mold themselves into a better fighter, and breaks a hand uselessly as Bort flashes in to save them. Cinnabar retreads their path again and again every night, searching for a way to die. The Lunarians come again and again, thwarted just in time through slicing and dicing. Everything in this world is cyclical, but stagnant, as if repetition is just a drug to somehow distance ourselves from what’s actually important. 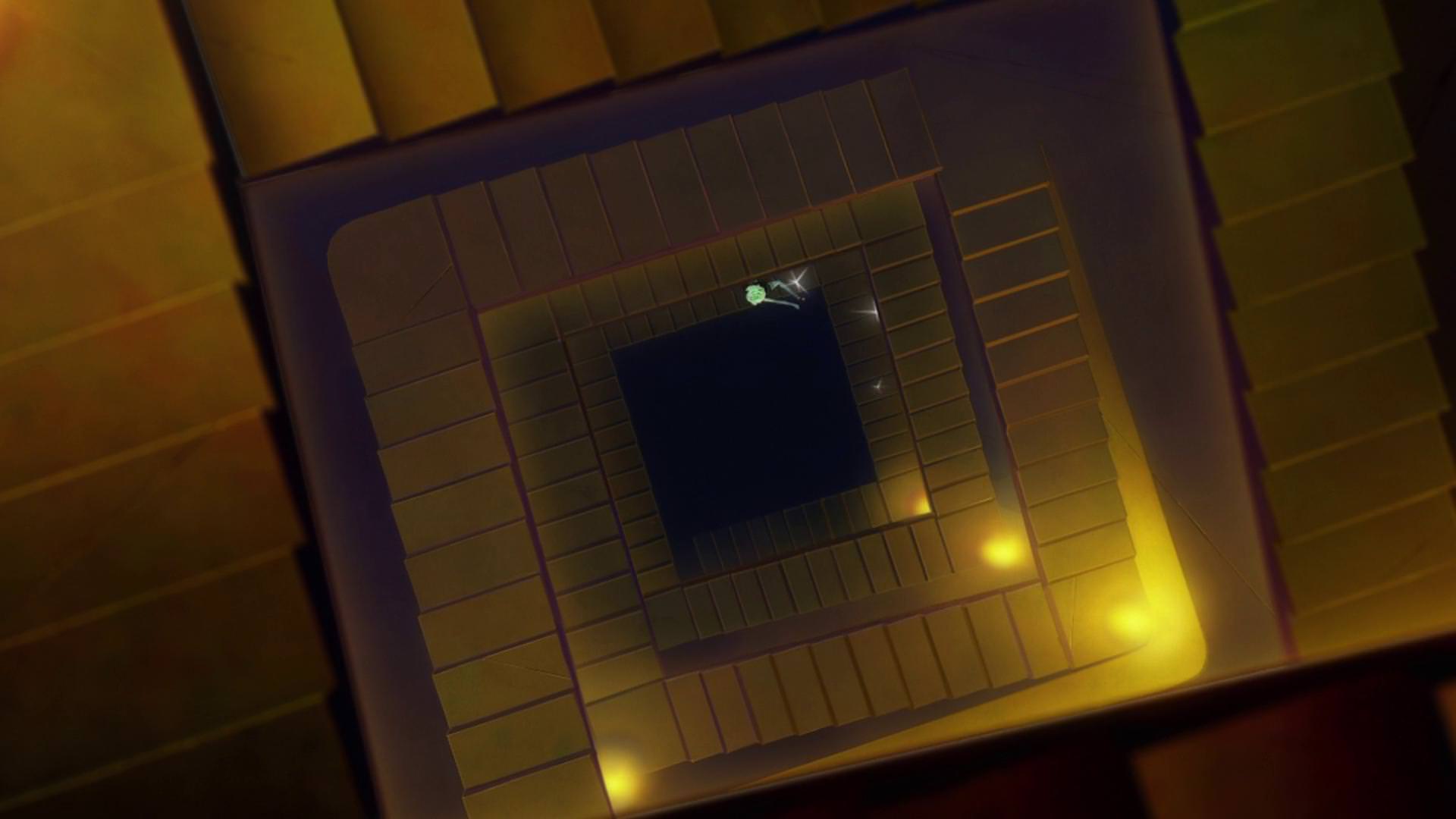 Luckily, the introduction of a GIANT SNAIL (yes, you heard that right) disrupts stagnancy and throws everything into chaos. I’m at a loss at this point as to whether this mangaka is drawing upon Buddhist references for an aesthetic or something more, but it’s clear that this giant snail changes the structure of these gems’ lives in more ways than one. For starters, it exhibits qualities that pose an active threat to the way the gems currently fight, since it can melt them much in the same way Cinnabar can. Secondly, it begs the question: where and how did the Lunarians retrieve this thing, and are there more? And lastly, unlike the Lunarians, this giant snail is an animal – it possesses no hive mindset. It acts irrationally, selfishly, and impulsively. It’s a force to be reckoned with, considering that at least, both the Gems and Lunarians work together for a greater goal.

All of these quirky threats stem from one thing that the gems, for all of their flawed beauty, cannot understand: death. Impermanence is a concept that is foreign to their ways, and the idea of evolution – of adapting, changing constantly to one’s surroundings and reactions – is something the gems remain firmly ignorant and apathetic of. After all, the gems don’t sleep, don’t eat, don’t die; they remain stubbornly consistent, never able to move on and progress. It’s no wonder that Phos’ wish is so surprisingly sad to Diamond – they can’t be reborn, no matter what. Nirvana here is no heaven. It’s a living hell of non-self. And so when the gems fear that Phos is dead – something that can’t possibly happen to a gem – they’re also liberated in their regular ways of living and thinking. But not first without exhibiting the poison that they all carry: ignorance, present in the absence of compassion.

It’s here where Diamond truly shines. Living in a communal society where everyone is defined by certain skills and traits, Diamond is admired, but never cherished. To them, other gems’ complacency is only a lack of acknowledgement; a satisfaction that can never be itched, since the only one better than them refuses to see them as anything more than a burden. Phos’ requests of help aren’t just a comfort to Diamond in Episode 2. They’re a confirmation that at least there’s someone out there that is searching for meaning and change. Perhaps our lifestyle is a zero sum game, and whatever turns we make in the corridors of our lives lead to dead ends; but we have to keep changing, twisting, looking. Diamond’s persistence and compassion are their greatest asset, despite them not knowing it. It bursts into color at the right moments, saving Bort’s reckless behavior in the neck of time, piercing Cinnabar’s unsettled and lonely heart, and finally culminating in a way to restore Phos from the snail’s shell. Despite all of these accomplishments, Diamond will always be unsatisfied despite knowing that they have to accept themselves for whom they are – flaws and all – and thus, their soft advice is one of the best moments of the episode. We know how to solve our problems, but at the same time, we are petty and weak people, molded by our uncertainties. They’ve settled in, brittle and fragile, but stubborn all the same: imperfections we can’t come to accept and truly overcome. 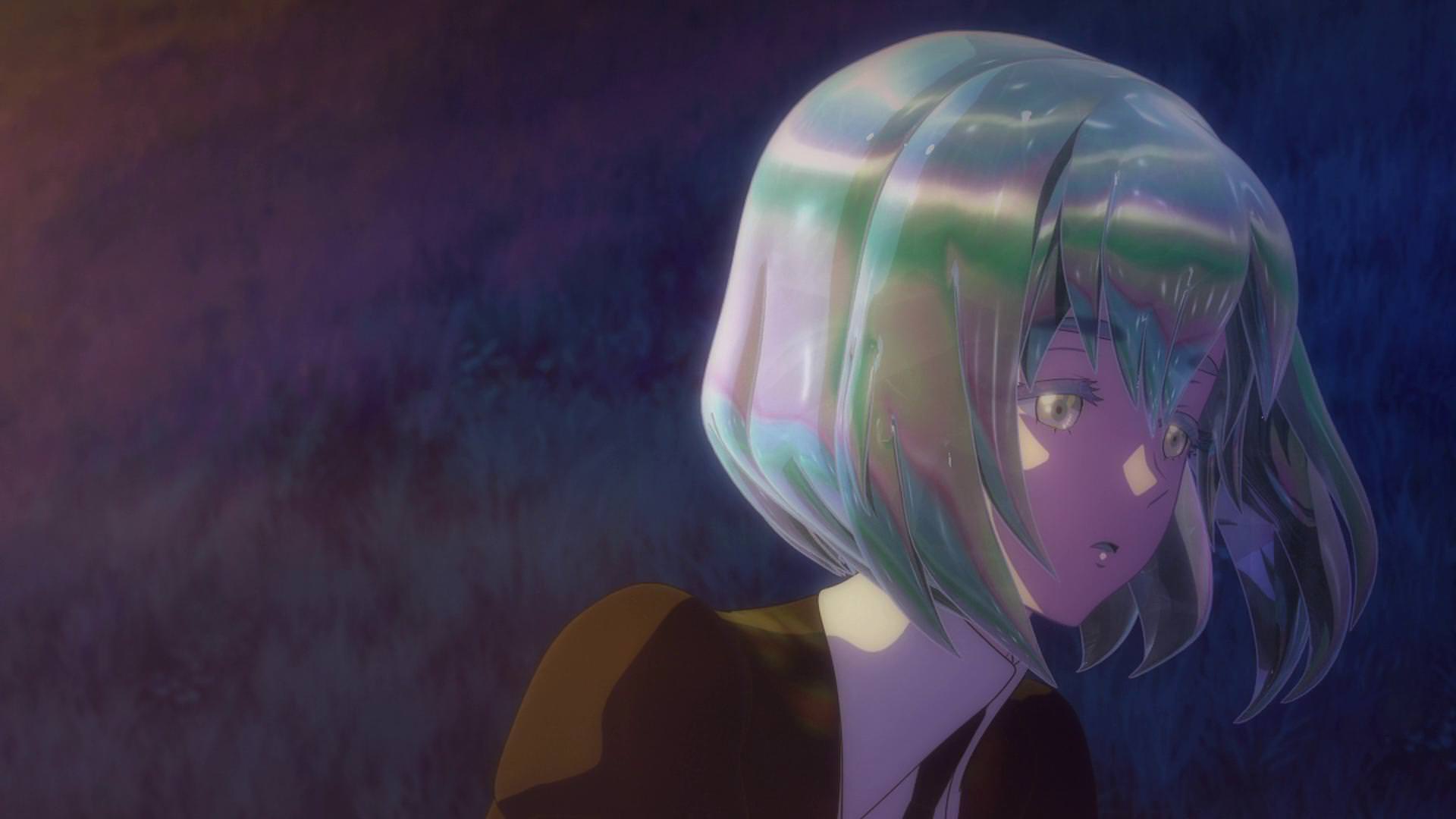 But something miraculous happens. Phos changes. They adapt. It’s a stunning development, because it suggest for the first time that gems may not just be soulless containers seeking warmth and purposeful existence. It’s living proof that the gems can escape out of this cage of permanence. They can become something more than just broken pieces glued together. In morphing with the fleshy imperfections of the snail, Phos has become something more. And as the beginning of episode 2 narrates, the gems were created through an evolution in the first place, split off from other species, and merged with microorganisms to become the way they are. In this sense, all it requires is a spark to ignite a change. Phos may seem useless, but they’re the trigger to something new and big, and I’m excited to see what kind of new transformations are in store for the rest of our cast.

Gems don’t die. They don’t eat, don’t sleep. But I do think they dream, in every waking moment they look out at the sky, wishing to be something more.

Sidenote: It’s worth mentioning that Land of the Lustrous has some of the most remarkable art direction and camerawork I’ve seen in a long time. I would almost argue that the camerawork is integral to the kind of minimalist atmosphere the show has. Land of the Lustrous is already very particular about framing each gem’s loneliness by placing them against a large backdrop of negative space. It doesn’t let us look away from those quiet moments, nor does it even let us focus on anything else. No pans, no cuts, no overlays, just pure centered imagery.

Diamond and Bort’s fight scenes are particularly unique because of how the camera utilizes 3D models in a 3D setting with the idea that these figures don’t move like human beings. With minimalist design, they can interact with the space around them in new ways. This gives room to stylistically approach intense moments as opposed to just animating them conventionally.

2 responses to “Transformation; Land of the Lustrous, Episodes 2-3”