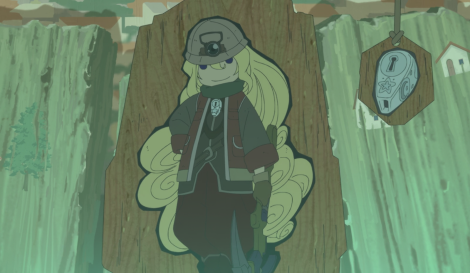 Much of Made in Abyss’ intrigue for me lies within two key elements – its main protagonist, and the world that she lives in. Episode 2 and 3 dive deeper into this in both aspects. Rico is one of the most endearing but also complex protagonists to be introduced to an anime in a while. She deviates from the norm of female characters that plague anime these days – a myriad of charming enthusiasm and apathetic intellect, with a dash of Tomb Raider bravery.  It is a rather strange combination, and while we got an introduction to it in Episode 1, Episode 2 and 3 focus much more on how Rico is the way she is and why.  Much of this is rooted in the way her society works.

Rico’s village is chained by myths and legacy. It feeds on the unknown, the unheard, and fragments of history scattered in the depths of darkness. Literally bound by a gaping hole as its backyard, the village revolves around the existence of cave raiding – as far as we know, it’s a profession that is so highly regarded that it finds itself woven into the actual culture and structure of the society itself. Many adults are cave raiders, and since exploring the Abyss requires time, effort, and extreme risks, there is a very good chance that it will take months – if not years – to make your journey back (if you make it back at all). As a result, many of the raiders’ kids are sent into an orphanage.  From there, cave raiding is drilled into the orphans as not just a means of self gratification, but as a way of self redemption. You only have worth if you become well known enough as a cave raider, and bring something of mysterious value back.

With this propaganda encouraged and instilled at such a young age, it is tragic and purposeful that young children are trained to risk their lives in search of treasure. The culture of Rico’s society is as bottomless as the Abyss itself – a perpetual cycle of reinforcing merit-based culture. It also gives much more meaning to Rico’s behavior and purpose in the story, as this kind of responsibility doubles in weight. She isn’t just bound to the Abyss due to her society. Being the sole descendant of the greatest cave raider of her village means that Rico has large shoes to fill, and for her, she wants to fill them fast. This is natural: Rico is young, and to her, nothing is greater than becoming the next greatest White Whistler, taking up her mother’s mantle and rising to the top of her village as a living legend.

Which is the point, really. Most of the Abyss’ legends are steeped in human failure. Lives lost are numbers; no one remembers the name of people who have died in the Abyss. The only things that do matter are the tangible items retrieved, and the people who brought them back. A legacy can only continue on the backs of the living. But no one will remember the dead ones – they are just as mysteriously lost as the treasures of the Abyss themselves.

It’s a harsh truth, and considering the severe side effects of the Abyss, it is no wonder that Rico is the way she is. To her, the dead are not monsters – they’re a constant fact of the kind of life she leads, and the regular price for discovering mysteries. She powers through in other ways. She loves the Abyss. She loves its riddles and its treasures. But she also loves the image of her mother left behind by the Abyss – a superhero, a wonder woman, a mother, and a cave raider. The greatest mystery for Rico isn’t necessarily Reg. It is finding her mother. This kind of humanist element is the trick to what makes Rico’s journey carry actual meaning other than simple curiosity. She is equal parts scientist and equal parts human, and while Rico still alienates us as an audience, we cannot help but be charmed by her simple and pure passion.

Rico makes a brave choice, but Episode 3 really lays out how risky that choice is. The odds are stacked against her in nearly every way: her body cannot physically endure the Curse, and being a Red Whistler, any piece of information she returns will be reduced to nothing more than a rumor. No one will help her past the second layer; she will become another empty voice, another soul lost in the beating blackness that has taken so many before her.

Rico doesn’t care, and her realistic but stubborn nature takes the forefront of the third episode, albeit through a different presence: Nat. For the first time, our gateway into Rico’s actions and thoughts aren’t through an impassive third person perspective, but through Rico’s childhood friend, who seems to be the most relatable character in the show. He, like us, perfectly understands the context of Rico’s decision, but in his own stubborn way, doesn’t care. Nat’s childishness and desperation to hold onto one of the few sane things in his world feels harsh, real, and sad, and culminates into one of the most heartbreaking scenes of the year when he has no choice but to come to terms with the fact that he will never see Rico again.

Interestingly enough, Rico and Reg’s departure is not shown from their perspective, but through Nat’s instead.

A legacy can only continue on the backs of the living. Rico cares not about legacy, but her journey remains, not only rooted in the Relics and truths she uncovers but also the lives she has touched. Of course, one doesn’t need to become a legacy to be important. They just need to live for something larger than themselves, and both Reg and Rico have found just that.

The question as to whether they can survive long enough to reach their goal – and what happens to the people they leave behind – is one to be answered, like many other mysteries that dwell in the deep.