2016 was a wild ride and I think a lot of us would have preferred it if this train-wreck of a year hadn’t taken off at all.

But there are a few wild rides that happened to me this year that I was glad for, and one of them is Golden Kamuy.

For those who don’t know, Golden Kamuy is an award winning series by Satoru Noda. With just only two years worth of publication so far, it managed to win this year’s 9th Manga Taisho Award, it was nominated for the 20th Tezuka Osamu Cultural Prize, and it was also recognized for the 40th Kodansha Manga Awards. 2016 might have been collectively terrible to the whole world, but it sure was a good year for Noda.

There’s so much critical acclaim for the series that even I have to wonder if Golden Kamuy is actually worthy of those accolades. See, I question this despite being a big fan because Golden Kamuy gets really freaking weird a lot of times. Not as weird as Jojo’s Bizarre Adventure gets, of course, but there are so many moments in Golden Kamuy that are ridiculous in ways that I didn’t expect critics would appreciate at all. But apparently, I’m proven very wrong by the amount of recognition the manga got.

It’s really hard to describe what Golden Kamuy’s about and why it’s such an entertaining read. If you list down everything it’s done, it honestly looks like a mess. It’s a gold-hunting action/adventure series, a thriller, a murder mystery, a wilderness survival story, a comedy, a cooking manga, an Ainu documentary… it’s all these things rolled into one chaotic series set in Hokkaido, starring a colorful cast of escaped convicts, war veterans, and Ainu hunters.

Based on the cover and its first chapters, I had come into Golden Kamuy expecting a gritty and dark story of a soldier-turned-amateur-prospector, dealing with PTSD from the Russo-Japanese war while searching for gold. I had expected the story of Sugimoto the Immortal, who would survive against serial killers and blood-thirsty military specialists using only his wits and the aid of the young but skilled Ainu huntress, Asirpa. Its introductory chapters were bloody and visceral. It had bears that gut out a person to leave their remains for leftovers, soldiers that desperately tried to cling to their lives despite their bodies being in pieces, and corpses skinned with the intention of making a morbid human-leather map – the manga made itself clear that it was the kind of series that wouldn’t keep many of the characters safe.

But then something strange happened.

While there were early hints in the survival tips given by Asirpa on the first chapters that the the series will teach a lot about Ainu living, it wasn’t until Sugimoto and Asirpa sat down to a traditional meal of raw squirrel brain-meat that the readers got a true taste (haha) of Ainu culture. At first it was such a strange occurrence. A chapter ago, a man had gotten shot in the head when it was revealed he was an escaped convict – why were they sitting down to prepare food and eat when the killer’s still out there looking for them?

But as the series went on, and the deeper that Sugimoto and Asirpa would dive into the forest trying to survive, the more we got to learn about Ainu cooking and the philosophies that revolve around it. Interspersed between the terrifying moments of survival, gore, and violence were these segments wherein the characters would gather in front of a campfire with their catch of the day, and Asirpa would teach her companions how she as an Ainu huntress was able to fend for herself in the wilderness through the knowledge passed down by her elders.

Asirpa breaks down the meaning of an Ainu dish she shares with Sugimoto, and lets him experience its process for himself.

It’s brilliant how Noda uses cooking as a gateway to talk about Ainu tribes and their way of living. In my personal experience, being together and conversing over a meal is the easiest way to bond with people, and this is used in Golden Kamuy as a method for the readers to connect with the characters and be invested in their values. From Ainu cooking, Noda then connects us to the Ainu’s relationship with nature. And then from the Ainu’s relationship with nature, Noda introduces us to the Ainu community itself.

And what makes Golden Kamuy a wild ride is how it’s still a story about hunting for hidden treasure, where stakes are high and people can die at any moment in incredibly gruesome ways. But it’s also a series where a group of people can learn so much about each other over a meal and talk about their philosophies and traditional beliefs, or make bad poop and penis jokes at the expense of others. Noda balances the series’ violence, gore, and political intrigue with its comedy, humanity and dedication to Ainu culture. This mixture of themes and genres should be too messy to work together, but Golden Kamuy is able to juggle these ideas coherently to make a gripping story. I look forward to a new chapter every time, wondering what the gang will have to go through next. 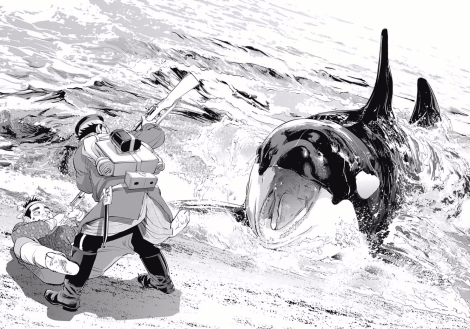 A visual summary of Golden Kamuy.

(I can’t explain Edogai, though, sorry.)

5 responses to “Day Eight: All Aboard the Satoru Noda Express”