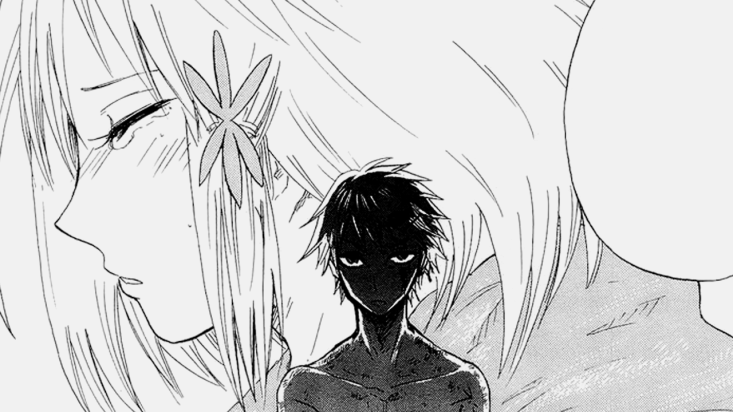 pu·pa ˈpyo͞op noun. an insect in its inactive immature form between larva and adult, e.g., a chrysalis.

Pupa is a strange little series. It contains many elements that would gross the audience out – incest, cannibalism, gore, unnecessary deaths left and right – but at the core of the series is an interesting tale about the budding romance between two siblings that unfortunately, festers into something much more disturbing and romantic at the same time.

The story revolves around a brother and sister – Utsusu and Yume and the tragic incident that befalls them. Neither character is necessarily memorable; Utsutsu is like every protective brother, keeping Yume safe and willing to sacrifice his life and flesh to make her stay alive. And Yume, like any other imouto, is childish, fragile, innocent and cute, seeking to relieve her brother of pain and sorry by also incessantly sacrificing herself. In a normal environment, the two are rather comedic and fun to watch as they go to school and lead happy lives. Would Pupa be your typical cheerful incest anime, and the story would stop there. Pupa is however, a tale of horror, and so things take a slightly different route when experiments go wrong and the sibling relationship is taken to a new level.

By extending tropes that are often taken for granted in incestuous anime – self sacrifice to the point of selfishness, an intense desire and protectiveness of each other – and letting them take root in toxic environments, we see the actual horror of such feelings. Utsusu and Yume’s relationship is pushed to dramatic extremes as their love literally becomes physically tangible and grotesque. They don’t just mentally or emotionally feed on each other’s need, but now physically depend on it too. Yume must consume Utsusu’s flesh, otherwise she will turn into a monster and consume others as well. And Utsusu must not just literally give up his life for Yume, but must give up his regenerative body again and again so that Yume’s hunger will be satisfied. It’s sick and hard to look at, but it’s also engrossing in a weird and entrancing fashion. By feasting on each other, Utsusu and Yume confirm their love in a sexual and carnal way (and the series makes no means to make this sexual act pleasurable or desirable  – eating someone’s flesh is painful) but also emphasize the fact that their love is sinful. There is something abhorrent in eating your sister/brother, just as there should be something abhorrent about loving your brother and sister in such raw ways. It is disgusting. It is unsightly. It is nauseating. It should be nauseating; society deems it as such….

And yet, perhaps it is because Utsutsu and Yume love each other so purely that amongst the flesh eating, tearing and ripping of human bodies, and strewn insides of men on the floor, that there is something beautiful about Pupa. Yume and Utsutsu are not just transforming physically , but emotionally as well. Their love for each other is in a pupal stage: caught in a fragile, innocent chrysalis where their love for each other itself is unadulterated. Each sibling is only managed to be brought back to their human senses by each other (ironically, it is the same effect that catalyzes their monstrous transformation in the first place). Their love is almost cute at times, grounded in the real; jokes are made, smiles are casted. With the constant sacrifices to protect each other, there’s this desperate feeling that more than anything, the two just want to be together – even to the extent of rejecting the chance of being normal ever again. It’s a rather dramatic kind of love, but one I can somewhat empathize with despite the cruelty in which it is deeply entangled in. Despite Pupa‘s attempts of being a horror series, it is the love Yume and Utsusu share that makes it incredibly romantic – almost on a Elfen Lied level, but more surreal, and more of a fairy tale than anything else.

What makes things interesting however, is the fact that such a pure kind of love exists in such a corruptive environment. How long can that kind of love last? Does it transform into something more monstrous than the virus that both Yume and Utsusu share itself? Or does it just continue to emphasize the problems that come with such a forbidden kind of love, building them to a point where both characters self destruct? Which will transform first: the bond between the siblings, or the siblings themselves?

Waking up from a dream to a nightmare, and then back again:  Pupa isn’t deep, complex, tragic, or unique in any way. The characters are pretty simple and the writing even more so. But I do particularly love how it chooses to play out its cards and contrast them side by side – the tragic, innocent love between siblings in the cruelest and most sinister of contexts, and how that in turn has an affect on the psyche of that love as it buds into something beyond our wildest dreams.  Such dramatic contrasts may be called horror, or plain pandering, but to me personally, it’s a wonderful subject that I can’t wait to see more of.