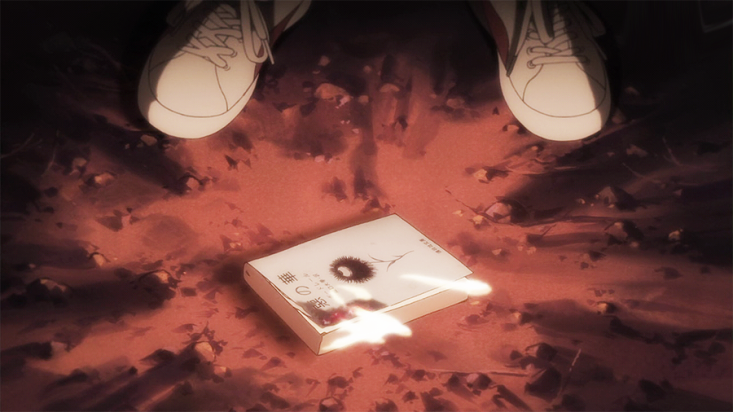 As the final thoughts of the Aku no Hana anime sit and cool down in a draft while we wait for Wendeego’s return (not your fault Wendeego!), I go back and return to the roots of my love for the series, digging deep and finding some surprising answers.

What is it that grabs me so much about Aku no Hana? It’s a question that’s been burning in my head for a few weeks now as my love spirals deeper and deeper for the show. Four weeks ago, I was really into the series. Yesterday, I ended up buying all the volumes, sifting through them multiple times and coming to tear up at some scenes. By the time I finished Volume 5, I realized that I had read the entire series in one sitting – a rare feat, as I tend to enjoy manga in bits and not in stretches. As I carefully put the tankobons under my bed and opened my laptop, something stuck. It stayed like a thorn, pressing deeply into my side, and even as I tried to sleep, the question remained. What makes this series so good? Why do I love it so much, and what does it say about me as an anime fan but also as my own individual?

Anime has always been my center of gravity – it pulls me right out from the world of usual fiction into a dazzling new life of colors, characterization, and beautiful art. It’s a place where I can connect with fresh characters, can look at art analytically, and enjoy a different kind of story. Of course this sort of goal isn’t achieved through every anime, but the past ten years have yielded a vast treasure of anime that have affected me in one way or the other. There’s Shinsekai Yori, Shoujo Kakumei Utena, Mawaru Penguindrum, .hack//SIGN, FLCL….the list goes on and on. They all have their own way of really reaching out to me: Utena and Penguindrum have incredibly accessible characters, Shinsekai has beautiful worldbuilding, and FLCL combines the right amounts of enjoyment and solid storytelling. Aku no Hana however, is a little different.

Oshimi Shuzo’s wields a far more powerful weapon: nostalgia. The key to Aku no Hana’s impact on the audience is memory; the unhealthy years we had in our middle school, the lingering idea that we have all been socially isolated or deemed unfit by our classmates, that burning sensation to become someone different. We may not necessarily connect with Kasuga’s perversion or his delusions of female grandeur, but I for one, can definitely remember the life of a stranded bookworm (I used to devour books as a middle schooler, and even tried to read Paradise Lost in eighth grade to try and prove myself as the coolest fucking kid on the block – it didn’t work). Of course, we don’t completely empathize with all of these characters. I never had a Nakamura in my life, nor a Saeki – but their personalities muddle with ones that left an impact on our lives. Nakamura is the mix of all the bullies I have seen in my life; she is also the part of me that often felt isolated by her class and society. Saeki is the blend of those girls who always sat in the front, getting their top scores with a gentle smile; she is also the part of me that desired to please everyone in my life. All three characters are very flawed people, but that’s perhaps the entire purpose. The audience recognizes the weakest points of these characters, witnesses their emotional and psychological downfall, and comes full circle to look back at the weakest and often darkest moments in their lives.

Which brings us back to our main point: the memories that carve the deepest are often the most uncomfortable ones. Oh, we remember the happiest moments in our lives. We remember that first A we got on our World History test; we remember the first friend we made, the best teacher we had, and our high school graduation ceremony. But as colorful as these memories are, they fade over time. We can’t say the same for the nightmares. For me, the memory where I was brutally bullied in middle school for liking Inuyasha is a scar that stays the most. It gets more powerful every time I look back at it, just like the rest of them; ghosts, eyes staring into the back of my skull. I still have the scars from self hurt as I spiraled down into the deepest moment of depression. I can count how many times the blade pierced my skin, sinking in deep and drawing out blood; I don’t remember the number of AP classes I passed, or which ribbons I wore when I donned my graduation cap.

Shuzo Oshimi understands this. Perhaps that’s why his coming of age story strikes something fresh and real when I read it instead of series like Fooly Cooly or Tengen Toppa Gurren Lagann. These two shows are great coming-of-age stories, but what differentiates Aku no Hana from these series is that it understands that our darkest moments are the ones that nurture us into who we are today. Thus, Aku no Hana is a deeply unsettling bildungsroman that draws strength from our greatest weaknesses and fears. Adolescence, Oshimi argues, is defined by our trying moments. Much like the show Skins focuses on the idea that “[teens] are failures and we love it,” Aku no Hana is about children whose adolescence is marked by failure. But there is no sense of victory or actual love in these moments. Kasuga does relish his flashes of anarchy with Nakamura, but in the end, these junctures are followed by horrible consequences. Youth is established by our most tragic and weakest periods. I for one, have stood on the top of my own patio, ready to jump and let it go. I never did, but there were so many times when I asked myself the same question Nakamura did: “What lies at the end of this road?” and wondered if it was worth throwing it all away. There were times where I completely collapsed under my own system, looking for a way out and knowing there wasn’t one. And there were times when I had no one to turn to, and so I relished the blade instead. In the end, the most I remember of my own adolescence is the breakdown. What’s left is shame, self loathing, fear, and hatred. These memories are the most powerful and life changing ones; they make us into who we are today, as they are the fuel that creates impulse.

Of course, if the story ended there, it really wouldn’t be a coming of age story. As much as adolescence may cast a shadow on our own life and identity, it does not consume us. And this is where nostalgia plays its second importance in Aku No Hana; that just because failure becomes us, we do not become failure. Of all the arcs where I empathize with Kasuga in the manga, the recent arc is where I connect the most. Post Chapter 33, Kasuga has realized how much of his life has been eclipsed by loss. His youth has been spent on moments where nothing came to fully bloom. His identity – much like the rest of us – is formed by the losses, not the wins. Because of his previous actions, he has disappointed everyone in his family including himself. What’s left is a “ghost.”

And yet, Kasuga manages to ‘move on’. He does not throw away his past altogether in dating Tokiwa; he crushes his own flower in a bleak moment of triumph. “I cannot remain a ghost for the rest of my life” he says, and puts his faith in something new. Something healthy. It is his own self – a self that is defined by inadequacy, but is not inadequate itself.

It’s probably the most powerful moment of Aku no Hana yet. At this point, Oshimi’s tool of nostalgia is used reversely. Rather than me just empathizing with these characters and using them as a medium to inspect my own darkest reflections, Shuzo makes Kasuga into a person I strive to be every day. Kasuga, a pervert, a loner whose youth was dead, takes his life back full force with the maturity and drive that I only wish I could have. This isn’t self pity. This is empathy at its strongest and in its most raw form. This is nostalgia that rubs in and makes me say, “It’s because we have all been in situations like Kasuga, Nakamura, and Saeki, that we must also push ourselves forward so that we can become better.” There is always time. Failure is not forever. Youth is, as long as we allow it. It’s the perfect modern bildungsroman, in a time when the glory of today’s youth is shadowed by so many uncertainties, but not conquered by them. And it is this story that speaks to me, nurses my wounds, and tells me: I can overcome it, not through perseverance, not through spirit, but through nostalgia and reminiscence.

Oshimi Shuzo once talked youth and adolescence in an afterword of Aku no Hana. He said, “When does adolescence end, I wonder? I think ‘adolescence’ covers that dark period between being an unthinking school grade kid and ‘adulthood,’ when you’ve gained discernment and slipped the chains of self-consciousness. The beginning of adolescence is easy to mark. Secondary sexual characteristics start to develop – things like a lowered voice, the beginning of a girl’s menstrual cycle, and the growth of pubic hair. These physical changes directly alter self-consciousness. But the end is harder to see. There are many people who reach middle age, begin balding, and get wrinkles and grey hair who retain the self-consciousness of adolescence. The onset hits you whether you like it or not, but the end doesn’t come to you of its own accord. That’s because it’s something you have to find for yourself.”

Perhaps that’s it. I am stuck in my own hell of adolescence, wavering between uncertainty and living up to people’s expectations of me, living in the world of the past. I am in a world where movement can mean nothing, because it’s me who has to make the first step, not my past self. Not my losses, though they are a part of me, and will always be a part of me. I am ultimately, a woman defined by those scars on her wrist and the failed suicide attempts. But I am more than that, too. The shackles are there – all I have to do is break them.

18 responses to “Youth is Dead, Long Live Youth; Aku no Hana and the Power of Nostalgia”