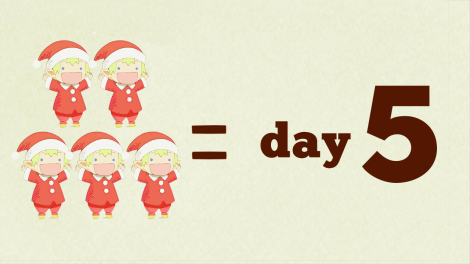 As Natasha puts down her keyboard and flies off to India for the holidays, it’s time for Steven and I to take up the pulpit for our favorite anime moments of the year. Again, this could be anything from the perfect fight scene to a late-night marathon, and memorable doesn’t necessarily mean “great.” With that, let us begin.On the fifth day of Christmas, my best friend gave to me…

Of all the series to be released this year, Tsuritama was probably the nicest surprise. Sure, it was great to see Shinichiro Watanabe to get back together with Yoko Kanno for Kids on the Slope, but screw it, I’d been waiting for auteur director Kenji Nakamura to do another show as great as his masterpiece Mononoke, and Tsuritama was pretty close. What might be most remarkable is that while the show was one of my favorites of the year, it was great in a completely different way from Mononoke. Both shared a distinctive visual style and unusual depth, but the latter was one of the best horror series ever animated while the former was a heart-warming story about friendship, fishing and the apocalypse. On the surface, it’s easy to call out Tsuritama as a simple coming of age story, lacking the astonishing density of Nakamura’s previous show. But I would say that not only is Tsuritama deceptively deep with allusion and mythological reference, but–most importantly–it possesses a depth of character which even Mononoke lacks.

Let’s take a look at Yuki, the show’ protagonist. At the beginning of the show, Yuki is socially incompetent, almost incapable of social interaction without drowning himself in fear and anxiety. His entrance into the world begins with the introduction of Haru, but I think it’s important to note that it isn’t Haru himself who pulls Yuki out of his shell. At the end of the first episode, as Yuki once more almost drowns in his own fears, it’s the pull of the rod that drags him, gasping, into the light. Yuki’s peers give him the tools he needs to change his situation, but crucially it’s Yuki himself who takes every step. Each of Tsuritama’s main characters has a fantastic arc, but Yuki’s might be one of the best simply because while he changes enormously from beginning to end, it’s also equally as clear that he’s still the person he always was, just happy and secure in his own abilities.

My favorite episode in the show might be episode five, when Yuki takes a summer fishing job that forever changes his life. Working with his friends Haru and Natsuki under the tutelage of Inoue Ayumi, he comes to realize over the summer that for the first time in his life, while surrounded by friends, he has stumbled across a hobby that he can be legitimately happy about. At the end of the episode, Yuki is probably smiling widely than we’ve ever seen him up to this point, and it can be said that it is from this episode onwards that he has finally,after many years of drifting, begun to come into his own as a person. Another show might have mishandled this development, drenching it in undeserved sentiment or long impassioned speeches, but somehow Nakamura is able to convey with a brilliant smile what lesser directors can take multiple episodes to establish.

To be fair, I’m probably more like Yuki than I’d like to admit. I’m older, I’m a pretty decent public speaker and have a number of very good friends, but there have been times when I’ve been petrified by self-doubt and almost drowned in my own water. Yuki’s own success as a human being gives me hope that some day, I’ll be able to hold my own head high and maybe even save the world while doing so. It’s a tall order, but I’ll be up on the ridge anyway, casting my fishing lure into the water and hollering “ENOSHIMA DON!” just like all the rest. In short, Tsuritama inspires me to be a better person, and that’s one of the highest compliments I can give.